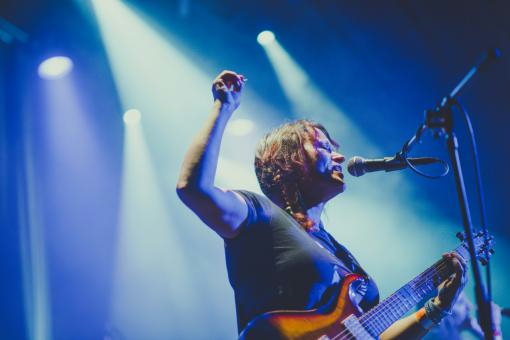 Many comebacks tend to provide rather a nostalgic or even sad perspective on something that will never return. There are however exceptions that prove the rule. Gaia Mesiah returned with its own verve and perhaps even greater energy than before. There were goose bumps at Fléda on Wednesday both among the audience and on stage. more

Brno said goodbye on Sunday to Marta Kubišová.  This made it the first city in the Czech part of the Marta Naposledy (Marta One Last Time) tour. It will end in České Budějovice on her 75th birthday. The Sono Centre, full to bursting, could enjoy not only a cross-section of her musical career but also a tribute to American pop music, given in her latest album “Soul”. As it has been for the last nineteen years she was accompanied on her final tour by Petr Malásek (keyboard) and a band made up of Martin Lehký (double bass), Budy Zbořil (drums), Josef Štěpánek (guitar) and František Kop (saxophone).  more

Brno celebrates the 20th birthday of the group Placebo

Birthdays, and not just those on stage, bring a need to look back. In the case of London’s Placebo this is the case twice over, because they returned in Brno to songs that they have long avoided playing live. They kept their promise and at the Brno Exhibition Centre they gave a two-hour cross-section show.  more

Beseda Night as a Prelude to the Tasov Festival

This year the Beseda u Bigbítu (BuB) festival celebrates its quarter century and to mark this milestone it has added a little warm-up in the shape of an evening concert in Kabinet Múz called Beseda night. It gives a foretaste of this year’s Tasov and the evening will be introduced by the Šumperk-Brno group Acute Dose. Last year’s wind brought in the group Please The Trees and the composer and DJ Václav Čásenský aka Atrey.  more

The Chick Corea Trio – a luxurious end to Jazzfest

Leaving aside the upcoming September bonus of the concert by Diana Krall, none other than Chick Corea with his stellar trio concluded Jazzfest this year. Together with Brian Blade and Eddie Gomez they brought this year’s event to a luxurious close.  more

The Jazzfest festival is coming to an end and after refreshment from the Czech and European scene came the genuine, almost classic American blues. The seventy-two-year-old giant Steve Gadd came to Brno with the guitarist Michael Landau, bass guitarist Jimmy Johnson, trumpeter Walt Fowler and on the piano and Fender Rhodes was Kevin Hayes.  more

Patricia Barber Seems as if Made for the Mahen Theatre

In including Patricia Barber in the concert series of the National Theatre Brno the director Filip Haberman has fulfilled not just his own dreams. The original jewel of the American jazz scene filled the Mahen Theatre with listeners and provided a spectacular musical experience. It was as if the space was predestined for the performance of this concert. The theatre auditorium underlined the singer’s grandeur, but at the same time created a chamber, almost club-like atmosphere. This time Patricia Barber travelled to the Czech Republic from her hometown of Chicago as a trio of young musicians – with the double bass player Patrick Mulcahy and the drummer Nat Friedman.  more

It Was Amazing. Fink and his Brno Premiere

Fink's last album Hard Believer played a special chord: it excited existing fans and attracted many new ones. It is quite difficult to find a record, the quality of the content of which would hold up from the first to the last song and would maintain a high, not only musical, level from the initial tones to the finish. However, Hard Believer fulfils this without an exception. The complexity and urgency of the music and lyrics permeates the entire record and the desire of the listeners to hear this all live brought Fink to the Czech Republic for the fourth time this year. After Prague, even Brno got its concert.  more