In an Old Photo: Today's premiere of the ÚstaF-voiceband.cz ensemble

Brno's ÚstaF-voiceband.cz is the only ensemble of its kind in the Czech Republic. It devotes itself to the interpretation of poetry on theatre stages. Today, Friday 8 November, it will present the premiere of its performance In an Old Photo, which will also be one of the first theatrical pieces in the newly created Brno field of performing arts called Terrain. The premiere deals with the work of Pernambuco by Ivan Wernisch.  more

David Radok's opera production Three fragments from Juliette / The Human Voice is in for its last performance. You can see it only two more times at the Janáček Theatre.    more

A concert called Valná hromada [General Meeting] will commemorate the legendary shows of music groups of the 1980s, when Brno's alternative scene was shaped. The joint concert will take place in ArtBar.  more

Leoš Janáček's teacher Pavel Křížkovský would celebrate his 200th birthday this year. The male choir Láska opravdivá [Truthful Love] will commemorate his anniversary by a concert at the composer's statue at the foot of the Špilberk hill. We will hear male choral pieces by P. Křížkovský and L. Janáček.   more

Janáček Quartet announced today that Jiří Kratochvíl,  founder and long-time member of the ensemble, died on 3 January 2020. He was 95 years old.  more

NdB Ballet is looking for new dancers for the upcoming season

The ballet company of the National Theatre Brno announces audition for dancers, both male and female (soloists and chorus) to be cast in the season 2020/21. The audition is announced to take place in April 2020.  more

The New Year's Concert of the Brno Philharmonic is coming back to the Janáček Theatre after almost three years, and for the first time it will be led by the Chief Conductor Dennis Russell Davies. In 2020, the ensemble will richly celebrate the 250th anniversary of the birth of composer Ludwig van Beethoven, whose 9th symphony will be heard at the concert. The solo parts will be accompanied by soprano Kateřina Kněžíková, alto Jana Hrochová, tenor Richard Samek and bass Roman Janál, accompanied by the Brno Philharmonic and the Czech Philharmonic Choir Brno.  more

The National Theatre Ballet will celebrate 100 years of its existence

The ballet ensemble of the National Theatre Brno celebrates 100 years since its foundation this season. On the occasion of this anniversary, the ensemble is preparing a gala concert at the Janáček Theatre, featuring dancers from major European ballet companies, as well as soloists of national theatres from Prague, Bratislava and Brno. Among the guest artists there are stars such as Diana Kosyreva, Natascha Mair, Philipp Stepin, Cesar Corrales and many others.  more

A new cycle of concerts of the Janáček Quartet is starting 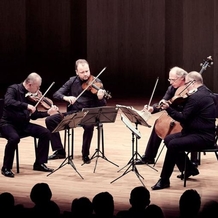 In 2020, the Janáček Quartet launches a brand new cycle of chamber concerts, in which it also welcomes guests from the ranks of  chamber ensembles and soloists. Four concerts of this cycle are planned to take place in the newly reconstructed Janáček Hall of the Brno Conservatory. The opening concert of the cycle is dedicated to the founding member of the quartet Jiří Kratochvíl, who died on 3 January 2020.  more