A journey around Europe with Czech Ensemble Baroque 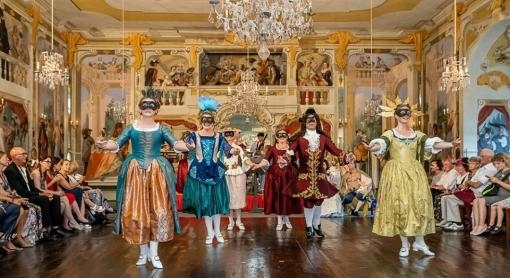 Czech Ensemble Baroque is preparing a concert in the Besední dům, which will guide the audience through musical Europe of the Baroque period. The Singende Geographie [Singing Geography] suite by Georg Philipp Telemann will be accompanied by a Baroque fashion show performed by the Alla Danza Brno – Baroque historical dance ensemble.

The orchestral suite will be accompanied by a Baroque fashion show and a dance performance of selected compositions performed by the Alla Danza Brno – Baroque dance ensemble. It focuses mainly on court Baroque dances from the French environment, their faithful reconstructions and their own choreographies in the so-called instructed interpretation. The suite will be performed by Czech Ensemble Baroque under the baton of Roman Válek. “When twenty-year-old Telemann wrote his Singing Geography, later reworked into the Klingende Geographie [Musical Geography], he had no idea that it would provide us, the people of the future, with something like a retro return to the past in the form of travelling around Europe. Just like in popular gourmet travelogues, here in Telemann's beautiful Baroque suite we will witness the habits and differences of national musical dishes the way they used to be served by 18th-century court and theatre orchestras. Typical music from Spain, France, Italy, Austria, Bohemia, Poland and Hungary will be confronted  with Turkish, Asian and even American music as imagined by the German Baroque genius Georg Philipp Telemann. Sitting in the Besední Dům, you will travel all around Europe and not only “, conductor Válek  invites you to the concert.

The concert is announced to take place on 27 February at 19:30 in the Besední dům.

CEB/ photo from archive of the ensemble