A Matter of the Heart: Carnival in the Bronx of Brno 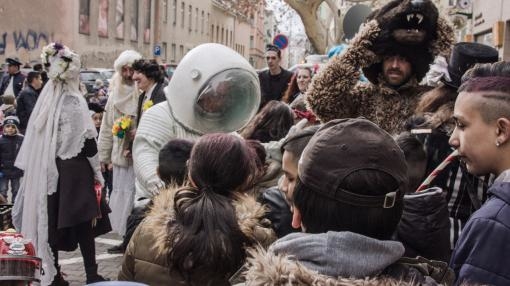 Carnival festivity in the locality nicknamed  "the Bronx of Brno" will take place for the second time this year. The aim of the event is to involve the local community and use the public space for meetings. This year's subheading is A Matter of the Heart.

Last year's session, which launched the whole event, attracted four hundred people. They walked along Hvězdová, Spolková, Cejl and Bratislavská Streets accompanied by a band. “People's interest was beyond our expectations. The charm was that masked children and adults from the houses we were passing by were gradually joining in the procession," recalls David Oplatek of the Tripitaka association, which organizes the carnival celebrations. This year's Matter of the Heart promises new items in the programme and in the organisation of the event itself. Everything will start with a meeting of masked people in the Pod Platany Square opposite the Káznice (former jailhouse). The masked parade will then be accompanied by the Samba band and dancers from Piroš rouža  along Bratislavská - Stará – and Francouzská Streets. The parade will also feature  an allegorical car that will carry a huge heart, and a figure of a gluttonous man in the outbreak of a heart attack. The procession will finish where it started, culminating in the symbolic burying of a beer box. The whole event is convened for 29 February at 14:30 in the Pod Platany Square opposite the Káznice.

The Carnival is organized by the Tripitaka association, based in the former jailhouse on Cejl Street, and is part of the Colours of the Bronx of  Brno project. This three-year community project aims to convince local residents that they can make a difference to their  surroundings and the way they live here. A centre of theatre, music, art and social activities was thus established in the Káznice; printed newspapers are published every six months, distributed for free to all post boxes in the area. In addition to the Colours of the Bronx of  Brno, the Drom organisation, the Museum of Roma Culture and the IQ Roma Service were also involved in the event through the Savore Džene Community Centre and the Centre for Parents with Children, who will perform as part of the accompanying programme at the Káznice.

Photo from FB Colours of the Bronx of Brno