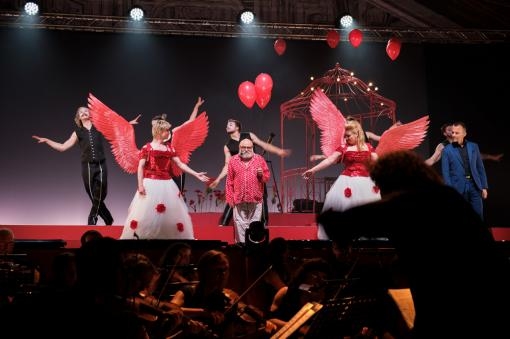 The Czech Ensemble Baroque is once again preparing a cycle of baroque and classical music called Bacha na Mozarta! (translator's note: in Czech, this is a pun meaning both "Bach on Mozart!" and "Beware of Mozart!")  The opening concert of the season will offer The Dream, an operatic pantomime by Michael Haydn with Arnošt Goldflam as the narrator.

The Brno cycle of eight musical evenings will begin in the Besední dům with a combination of music, theatre, words, singing, fantasy and choreography in Michael Haydn's "Dream" pantomime with narrator Arnošt Goldflam. 'Der Traum' was composed at the time of the emergence of pantomime as a popular genre. As opposed to a ballet performance, the movement of dancers in pantomime follows directly from the story and thus recalls the musical as a    popular musical dramatic genre of the 20th century. "Long before Wagner's invention of the Gesamtkunstwerk, some authors came up with the idea of ​​enhancing the effect of music, words and images on the audience. The brother of the more famous Joseph, Michael Haydn, transformed this idea into a real theatrical "fantasy". Dream images are combined in a synthesis of musical vocal and instrumental genres to draw listeners into a fantastic whirlwind of late Baroque emotions," said Roman Válek, the conductor and founder of the Czech Ensemble Baroque, in his invitation to the concert. The opening concert is scheduled for Thursday 24 September from 7.30 pm in the Besední dům.

The opening concert will be followed during the season by other famous titles and modern premieres; in addition to well-known names also young, promising artists will appear. Aside  the aforementioned 'dream' pantomime with mimes, there will also be a virtuosic psalm, a requiem, a shepherd's mass, an oratorio about the "Power of Music" with Krystian Adam in the title role, a special vocal programme, the rediscovery of F. I. Tůma and the modern world premiere of a late Moravian Baroque oratorio.

"THE DREAM" – AN OPERATIC PANTOMIME

Virtuoso Psalm 110 Dixit Dominus ("The Lord Said") written by George Frideric Handel during his "Italian" period, when he was only 22 years old.

A noble requiem of the Viennese imperial composer Johann Joseph Fux, which accompanied members of the imperial family on their journey to eternity.

The first Slovak Christmas Mass with folk motifs, composed by the Franciscan monk Georgius Zrunek in 1766.

Handel's first English oratorio with the subtitle "The Power of Music", featuring the Polish tenor Krystian Adam in the title role.

The Czech Ensemble Baroque choir in a vocal programme full of parallels and contradictions, or what is changing and what remains?

The first of a series of planned critical transcriptions of Ignác Tůma's works launches a long-term project that will follow on the rediscovery of the works of F. X. Richter. A modern world premiere of his requiem.

A modern world premiere of the oratorio of the late Moravian Baroque.

CEB / photo from archive of the ensemble