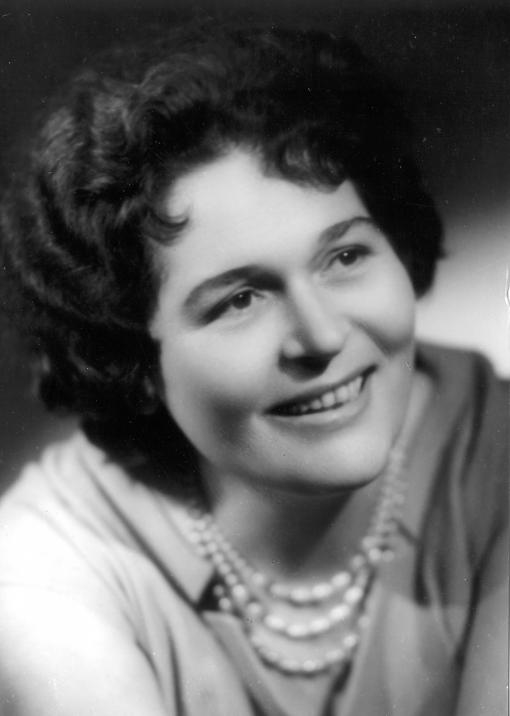 Marie Steinerová, a soloist of the Brno National Theatre and a key performer of the title roles in Leoš Janáček’s operas, would have turned 100 years old today, 10 January 2023. The Brno National Theatre will dedicate a performance of Puccini’s Tosca to the singer on 10 February 2023 at the Janáček Theatre. A portrait of the artist will also be on display in the first order foyer of the Janáček Theatre from today.

Marie Steinerová, née Štrosová, came from an artistic family. Her father was the actor and musician Miroslav Štros, her mother Marie Minářová-Štrosová was an opera singer, among others a soloist at the BNT Opera in 1929-1931. Marie Steinerová studied at the State Conservatory under professors Hilbert Vávra and Bela Chalabalová-Rozumová and as a student she made her debut on the stage of the Ostrava theatre with the title role of Dvořák’s Rusalka (1943). During her studies she gained experience at the Vlasta Burian Theatre, in the opera company of the 5 May Theatre and in the opera of the Ostrava Theatre, where she was engaged from 1946-1948. She regularly appeared as a guest artist in a number of Czech theatres, including the National Theatre in Prague, but her home stage from 1948 until her retirement in 1981 was the National Theatre in Brno.

Her repertoire included heavy dramatic roles, among the most successful being Milada in Smetana’s Dalibor, Gretel in The Bartered Bride, Libuše, the Foreign Princess in Rusalka, the title role of Aida in Verdi’s opera, Tosca in Puccini’s opera, Ortrud in Wagner’s Lohengrin, and Marina in Mussorgsky’s Boris Godunov. A separate chapter are the characters in Leoš Janáček’s operas, which were the singer’s domain: Emilia Marty in The Makropulos Affair, Míla’s mother in Fate, Kabanicha in Kate Kabanová, Jenůfa and especially her beloved Kostelnička in Her Shepherdess. She also often chose Janáček's repertoire for her concert performances.

In addition to her own artistic activities, she was a teacher, teaching singing at the Brno Conservatory and the Janáček Academy of Performing Arts. Marie Steinerová is the recipient of numerous awards. In 1954, she won first place in the singing competition for the Emmy Destinn Prize, she also received the Senior Prix award, the DIVA Prize, and the Thalia Prize for lifetime mastery in the field of opera. Until her late teens she was actively interested in cultural, political, and sports events, participated in meetings with the audience in the programmes of the Friends of Opera and Ballet Club, and worked as a voice consultant.