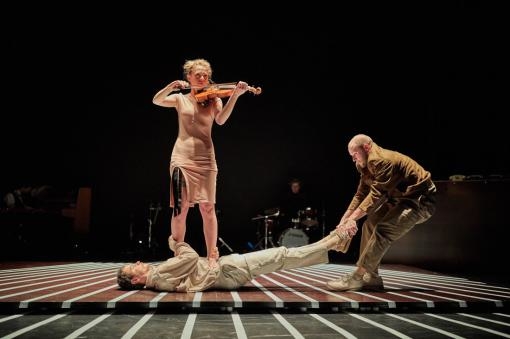 The multi-genre festival held under the title of Brno Marathon of Music has published a part of its main programme today. During the four days of the festival, traditional "streetless busking", a meeting of organ players, an event called "Endless Organ" at the Jesuit Church and another one named Pianoštafeta [Piano Relay Race] in the Alfa Mall will take place in the city centre. Performers  such as  DJ Jon Hopkins from Britain, the dance circus group Motionhouse and NoFit State or Cirk La Putyka will come to perform in Brno. The local scene will be represented by the ensemble Hausopera with their show entitled The Last Polo, which will take place directly in the swimming pool of a spa.

Since its successful entry into the UNESCO Creative Cities Network, Brno has boasted the title of "City of Music". The aim of the Brno Marathon of Music festival, which is entering its fourth season this year, is to turn the city centre into one big music scene for four days each year. There will be a large stage on the Dominikánské náměstí square, with a mix of genres, from alternative and film music to rock and pop. Children and adults will enjoy their time here. A chill-out zone with an information kiosk of the festival will be placed in the courtyard of the Old Town Hall. The already traditional "street-free busking" of Kateřina Šedá will be set up this year by means of special “rooms” for street musicians in the streets of Brno. In addition to busking, the programme will also feature roller organists at the Jesuit Church and pianists in the Alfa Mall. Folklore will not be missing either. This year's novelty is a folk and alternative stage.

The Cirk La Putyka  new circus ensemble will bring its production Isole to Brno; it is based on the Italian term for "islands" and at the same time it refers to the poem No Man Is an Island by John Donne. The Brno premiere of this performance will be held under the auspices of the Prague Letní Letná Festival. This time, the spa in Rašínova Street will be an unusual venue for a cultural experience. The site-specific opera Poslední pólo [The Last Polo]  has been staged to the measure of the pool in which it will take place. The music of Marek Ivanović will mingle here with graceful movements of a synchronised swimming team; the nostalgic libretto by Josef Škarka, performed by opera singers dressed in swimsuits, will confirm that the first love is never to be forgotten. Behind this one-act opera stands an association of enthusiasts – professionals named Hausopera.

Electronic producer and DJ Jon Hopkins, also known for his collaboration with the band Coldplay, is coming to Brno from the UK. The synonym of Hopkins' own work is a dazzling organic sound and refined sense of composing multilayered compositions. His production is a showcase of a sophisticated visionary mentality full of contagious sensuality, which finds it  fans across multiple genres.

A show entitled BLOCK will demonstrate what emerges from a combination of dance and circus, as it shifts the boundaries of both forms of art. Artists from the ensembles Motionhouse and   NoFit State will gradually put together twenty voluminous  blocks into an endless variety of shapes and configurations, where they play their show about life in the city, including all its contradictions and challenges. This performance is brought to you by the Marathon festival in cooperation with the "Na prknech, dlažbě a trávě" [On Planks, Pavement and Grass] festival. Admission is free of charge.

Isole - Cirk La Putyka / photo from archive of the ensemble