Brno Philharmonic: Pictures at an Exhibition will be accompanied by visualisations of Cori O'Lan 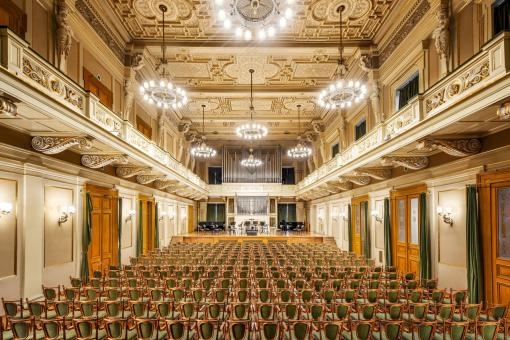 This Thursday and Friday, Brno Philharmonic will present a programme entitled Pictures at an Exhibition, which will feature three great music pieces accompanied by visualisations of Cori O´Lan. These were created  in collaboration with Ars Electronica, an organisation focusing on the use of latest technologies in art. The concerts will be conducted by  Dennis Russell Davies.

This time, the Brno Philharmonic will again once again appear at the Janáček Theatre, where large screens will be placed behind the orchestra and on both sides of the orchestra throughout the evening. The visualisations prepared specifically for this project will be personally screened by Cori O´Lan, a world-renowned visual artist. The concerts have been created in collaboration with Ars Electronica, in which Dennis Russell Davies has been engaged for years in the development of computer technology, thanks to which an image reacts  in real time to sound stimuli. The opening piece, the popular Pictures at an Exhibition by Mussorgsky, will be played in the colourful instrumentation of Maurice Ravel. “When creating this part, I was inspired by the drawings of Kandinsky from 1928 with many geometric elements and figures. These will respond lively to the music thanks to sensors placed above the musicians. This will make the orchestra sound visible in real time,” O´Lan describes his work.

The following Frescoes of Piero della Francesca by Bohuslav Martinů will be accompanied by shots of frescoes from the Basilica of San Francesco in Arezzo, Italy, visited by O'Lan together with the chief conductor of the Brno Philharmonic Dennis Russell Davies. He took hundreds of pictures there, which he will put into high-resolution panoramas and use them as a basis for his work. Precisely those frescoes inspired Martinů for the composition, in which he captures (in his own words) "solemnly rigid peace and gloom, a colourful atmosphere full of unsuspected, peaceful and emotional poetry".

The evening will be closed by Hindemith's Symphony: Mathis der Maler composed on the basis of music for his full-feature opera of the same name. Against the background of historical events, it develops the inner drama of a famous painter, creator of the Isenhem Altar, Mathis Nithart Gothardt, properly named Matthias Grünewald, who was disturbed by questions about the meaning of life. This composition will also be accompanied by O'Lan's original visualization.

The concerts are announced to take place on 12 and 13 March from 7:00 pm at the Janáček Theatre.