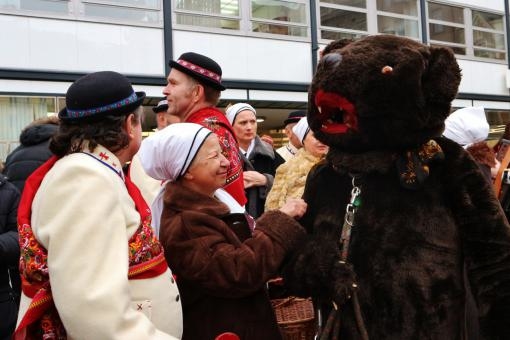 With Ash Wednesday, which this year fell on 14/2, ended for us the period of revelry linked to it – parades, feasts and other forms of entertainment. The four-week period of Lent has begun, culminating in the celebration of Easter. The last few days before Ash Wednesday are the time of masopust, fašank, vostatek and končiny. These are all Czech local names for traditional processions and costumed celebrations. The festivities have a very long tradition of celebrating the solstice, predating Christianity and reaching far back into antiquity. They take place in various forms throughout Europe. In South Moravia there are several places where the folk tradition of the celebration of fašank has become famous thanks to its specific form. The best known of these is the village of Strání, where for the whole weekend until Tuesday’s burial of basses a Festival of Masopust Traditions takes place.

Brno’s citizens do not miss out on these celebrations. As has already happened several times it was organised by the Slovácko ensemble Šafrán. Brno’s fašank took place, as it is meant to by custom, on Tuesday. From 4 p.m. on Náměstí Svobody there were performances from the folk ensembles including Brněnský Valášek, Krojovaná skupina z Komína, Lučina, Májek, Slovácký krúžek z Brna, the Slovácko ensemble Šafrán, VUS Ondráš, and Tereza Škrháková and the Hudecká skupina z Komína. The ensembles paraded around the city and made several stops, as is customary in folk precessions, for example at the Old City Hall or the Palace of Noble Ladies where the Ethnographic Museum is based. At each stop they performed something from their masopust programme. There was also a sabre dance and ‘leading the bear’. Viewers can even find the original costumes of Jew, bear, straw-man or a granny with a basket. After their performances they were rewarded with small refreshments, also in the spirit of the traditional event.

Even in the environment of the city centre Brno’s fašank maintains its folk spirit. This is mainly thanks to the appropriate choice of participants and a typical friendly atmosphere, which is an indubitable part of this tradition.