Czech Ensemble Baroque: The last concert of the Bach on Mozart! cycle and F. X. Richter 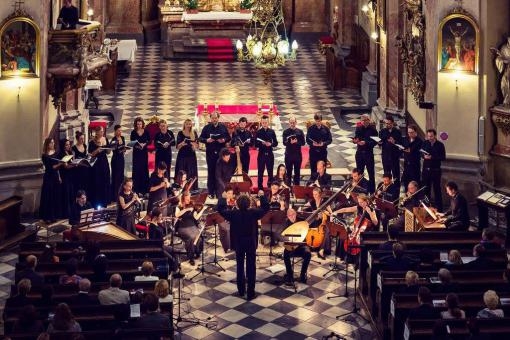 As part of the final concert of the Bach on Mozart! cycle we will hear Baroque music by F. X. Richter in the St. Johns' Church. The Czech Ensemble Baroque will end the 7th season of the cycle with three rediscovered compositions by this distinguished Baroque composer, which have never been played over the last twenty five years. The concert will be conducted by the founder of the ensemble, Roman Válek.

Franz Xaver Richter, a native of Holešov, violinist, music teacher, singer and Baroque composer, influenced such great personalities as Mozart or Haydn. This year, he would be celebrating his 310th birthday. In his honour, the Czech Ensemble Baroque for the first time in modern history rehearsed his motet Miserere mei Deus, a concerto for harpsichord and orchestra in G major, and especially the celebrated cantata Super Flumina Babylonis, which was Richter's most successful work during his life. The concert will take place on Wednesday 29 May at 7:30 pm in the St. Johns' Church (at the Monastery of Friars Minor).

F. X. Richter was born on 1 December 1709, probably in Holešov. His religious as well as secular compositions enjoyed great esteem in their time and were published in a number of European countries. He also excelled as a teacher of composition and many prominent musicians were among his pupils. He was one of the leaders of the so-called Mannheim Music School, and from 1769 he served as the bandmaster of the Strasbourg Cathedral, which was one of Europe's most prestigious music positions of that time. His chamber and orchestral works contributed to the development of the classical instrumental style. He died on 12 September 1789. It is said that his Requiem, which he had composed for his own funeral, was performed over his coffin during the funeral rites; the story also says that he had carefully reviewed the score even on the day of his passing away.

The Czech Ensemble Baroque has been concentrating on this composer for several years and now crowns its efforts with three modern-time world premieres in a single concert. The newly discovered cantata Super Flumina Babylonis [Over the Rivers of Babylon] was Richter's most successful work during his life. It even won the prestigious Mercure de France award. The concert will also feature Miserere in F minor and a partially reconstructed Concerto for harpsichord in G major, the soloist in which will be Barbara Maria Willi. With this concert, the Czech Ensemble Baroque concludes a series of recordings and world premieres of Richter's works, which it has systematically devoted itself to since 2014. “Super Flumina Babylonis is a grandiose cantata for solos, choir and orchestra. Richter uses various composition forms and elements in it – solo arias, duets, virtuoso violin passages, extensive double fugues and choirs, but in addition to Baroque elements, also some features  of the Mannheim Sturm und Drang and emotional style,” says Roman Válek, conductor and founder of the ensemble.

Photo from archive of the ensemble