Dunaj of Consciousness: The Brno premiere will take place today 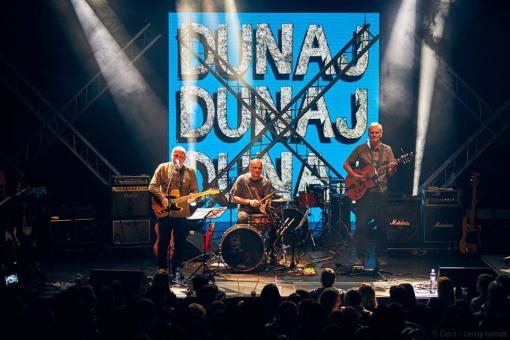 Tonight, Scala University Cinema hosts a documentary river-movie premiere that captures the story of the group Dunaj. The screenplay and direction of the documentary was undertaken by David Butula. The film was screened at the Jihlava International Documentary Film Festival, and now it is about to be featured in a cinema for the first time.

The documentary describes a journey of the founder of the group DUNAJ Vladimír Václavek to follow the band that no longer exists, as one of its original members, who refused to revive the band for a long time. The original line-up of the band meets in the documentary on a ship cruising the river Danube (in Czech: Dunaj, i.e. the name of the band), heading to a concert in Banat, Romania, to meet 20 years after the death of their frontman Jiří Kolšovský again at a unique concert. The crew includes Vladimír Václavek, Josef Ostřanský, Pavel Koudelka, Pavel Fajt and lyrics writer Karel David. The band will thus virtually accompany Jiří Kolšovský to the other side, meet their former vocalist Iva Bittová and introduce the new DUNAJ to the world. The premiere of the documentary will take place today 30 October  2019 at 8:30 pm at the Scala University Cinema.

The director and author of the documentary David Butula works as a documentarist, dramaturge and musician. He worked as a production manager in the Brno studio of Czech Television and later also as a councillor of the Brno-Central city district for culture, tourism and sport. He organizes cultural festivals, is a member of the band Bubbletones and currently holds the post of director of Brno's Post Bellum – Memory of Nation centre.