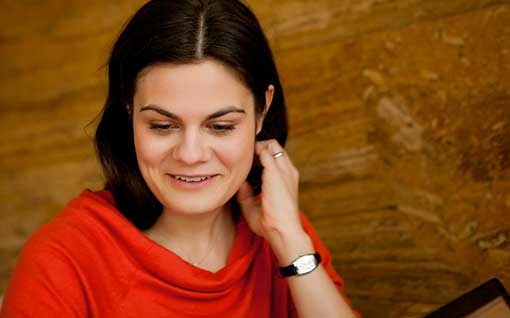 Ivana Rusko (née Krejčiříková) was one of the first primadonnas in the history of the ensemble. Now, Rusko will appear in Brno after many years with her husband, the tenor Jan Rusko and Slovakian pianist Matej Arendárik. The programme of the concert is a cross-section of Czech and Slovak music composers ranging from Vítězslav Novák to Peter Špilák.

In 2014, Ivana Rusko performed in a joint recital with the baritone Aleš Janiga, and after five years she will appear in Brno again on 14 May 2019 from 7:00 pm in the Convent of Merciful Brethren in Brno.

The soprano singer Ivana Rusko was born in Přerov in Moravia. She completed her singing studies at the Academy of Performing Arts in Bratislava in the class of the mezzo-soprano Hana Štolfová and subsequently with the soprano Magdalena Blahušiaková. Already during her studies, she starred as a Countess in Mozart's The Marriage of Figaro at the State Theatre in Košice, and collaborated with a number of ensembles specialising in early music (Collegium Musicum Brno, Hofmusici, Musica bellissima, etc.), and she also stood at the beginnings of Ensemble Opera Diversa. In 2010, she became a member of the International Opera Studio in Zurich, which later (2012) brought her a contract with the local Opernhaus Zürich. Soon she was given the opportunity to appear as a guest in other major European opera houses (such as the Ópera de Lyon, where she starred in the key role of Lauretta in Puccini's opera buffa Gianni Schicchi, directed by world-famous David Pountney). Her concert activity is rich as well: Ivana Rusko's repertoire includes Handel's oratorios Messiah and Jephta, Mendelssohn's Eliah and Schumann's Szenen aus Goethes Faust [Scenes from Goethe's Faust]. In the autumn of 2016 she made her debut at the Danish Royal Opera in Copenhagen, where she performed as Puccini's Musetta under the direction of the Estonian conductor Vello Pähn. In the 2016/17 season, she performed in Cologne, Germany (Oper Köln), in a series of great soprano roles: again as Janáček's Cunning Little Vixen, then as Orff's Die Kluge, Puccini's Liu (Turandot) and Marzellina in Beethoven's Fidelio.

The tenor singer Ján Rusko graduated in Music Pedagogy and Aesthetics from Matej Bel University in Banská Bystrica. He then studied singing at the Academy of Performing Arts in Bratislava with Magdalena Blahušiaková and attended several master classes, including those of Peter Dvorský. From 2011 to 2013, he performed as a member of the International Opera Studio in Zurich, where he sang in the opera house in the roles of Nearco (Poliuto), Yarishkin and the first son (The Nose) and others. From 2008 to 2011 he appeared in Slovakia at the State Theatre in Košice and at the State Opera in Banská Bystrica, where he created lyrical, comic and character roles for the tenor voice: Gonzalve (L'heure espagnole), Lensky and Triquet (Eugene Onegin), Vašek (The Bartered Bride), The Abbé de Chazeuil (Adriana Lecouvreur), Lord Arturo Bucklaw and Normanno (Lucia di Lammermoor), Goro (Madama Butterfly), Remendado (Carmen), Spoletta (Tosca), Gaston (La Traviata), Monostatos (The Magic Flute), Don Curzio (The Marriage of Figaro) and Bastien (Bastien und Bastienne), Alibaba (Indigo and the Forty Thieves) and Bondy (The Duchess of Chicago). In the 2013/14 season he made his debut at the Biel Theatre in the role of Alfred in the operetta The Bat. Matej Arendárik studied piano at the Conservatory in Žilina and then at the Prague Academy of Performing Arts under Marián Lapšanský. During his studies he was a member of the AMU Piano Trio. He made his debut as a soloist with the Slovak Philharmonic Orchestra in 1998. He then appeared in major concert halls (Concertgebough Amsterdam, Stadthalle Bayreuth, Forbidden City Concert Hall Beijing, Southbank Centre London, Palacio de Congresos Zaragoza, Rudolfinum and Smetana Hall in Prague, Besední dům in Brno and many others) and at major music festivals (Beethovenfest Saint Ettiene, The Prague Spring, New Masters on Tour in The Netherlands, World of Jewish Music London, Central European Festival of Concert Art in Žilina, Afyon Classical Music Festival in Turkey, St. Wenceslas Music Festival, Bratislava Music Festival, etc.). As a chamber musician he worked with the Talich Quartet and the Suchoň Quintet. He works as a répétiteur at the J. L. Bellu Conservatory in Banská Bystrica.

[Seven Songs in Folk Tone for Soprano and Piano]

[Hey, My Sweetheart for Female Voice and Piano]