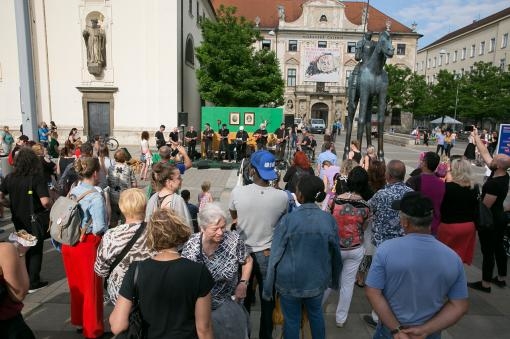 The world celebration of music, known as  Fête de la Musique, will be held on this particular day of 21 June. The current situation does not allow for mass celebrations in the form of concerts, happenings and performances in the streets of UNESCO Music Cities. That is why this year's celebrations of music will take place in the form of an online concert. Today's virtual music festival, which starts at 12:00, is jointly held by more than 20 cities from all around the world. You can watch the concert on the Facebook page UNESCO Cities of Music and on YouTube.

Brno is one of the UNESCO Creative Cities of Music. Today, these cities celebrate Fête de la Musique or Day of Music. This day will be celebrated all around the world in a rather unconventional way. The event in the streets of cities will be replaced by an online concert in which artists from UCCN UNESCO partner cities will present themselves. Selected artists from UNESCO partner cities will be featured, and the broadcasting will virtually visit Australia, New Zealand, Palestine, Chile, Colombia, Jamaica and South Korea. You can watch the whole event today, 21 June 2020, from 12:00 noon on FB and YT. The contribution of Brno City of Music will be broadcast from 16:00 pm.

Due to the situation with COVID-19, this whole project also has a charitable background. The artists will be paid for their musical contribution, because most of them have not performed for a long time and some will not perform for a long time either. Financial support will be collected via online fundraiser. The amount raised will then be donated to the COVID-19 Solidarity Response Fund for the World Health Organization. The concert is promoted under the heading of the WeRculture campaign, which during the pandemic emphasizes the importance of responsibility and respect for the community.