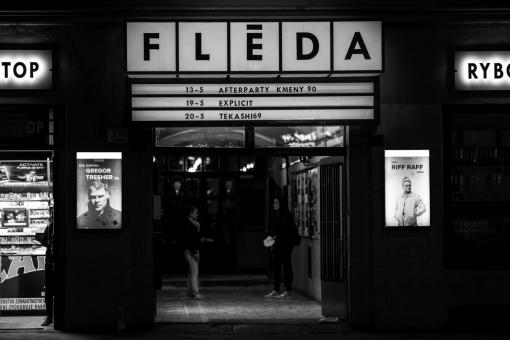 The Fléda Club celebrates twenty years of its existence this year. For this festive season, subtitled FXX, it brings a number of new additions as well as refurbished premises. As the organizer, it will present the new MAUSHAUS festival at the Brno Exhibition Centre for the first time.

The autumn dramaturgy with the subtitle “FXX” runs in the spirit of celebrating two decades of the club’s existence. “Over the past twenty years we have managed to make Fléda one of the most significant spots on the Czech, as well as wider European, club map. Thanks to this, we regularly bring world-class names to Brno. Then, during the pandemic, we managed to keep the team behind it all together. That’s what I appreciate the most,” sums up the club operator Lukáš Stara and he adds: “We will definitely not skip the celebrations. In spite of the unpredictable pandemic situation, we have prepared a big return for the fans. Just as such an anniversary calls for.”

The packed programme of the birthday-celebrating season also includes international stars. Boys Noize, a Berlin-based producer, will have his premiere in Brno. One of the most prominent personalities of the electronic scene in recent years, who has collaborated with Tommy Cash, Frank Ocean and A$AP Rocky, will present his anticipated new album entitled “+/-” in the only show in the Czech Republic this year. It will be no different with the return of the acclaimed Icelandic project Gus Gus, which brings a fresh album, “MOBILE HOME”. A pair of headliners of the respected club series ECHOES, John Talabot (ES) and Surgeon (UK) promise unique dance experiences. The celebrations of what is the traditional Brno cultural “Mecca” cannot miss stars of the local scene such as Monkey Business and PSH, Ventolin, MIG 21, Midi Lidi or J.A.R.

Visitors to the club can look forward to returning to the renovated space. During the venue’s closure during the pandemic, the equipment of the entire club was significantly changed. The main bar and the legendary “little bar” have been transformed. The part adjacent to the club yard can also function as an independent operation after extensive modification and soundproofing.

A separate chapter is the new festival MAUSHAUS. It will take place in the area of the Brno Exhibition Centre, where it will present a foreign line-up of techno-underground artists. “We have wanted to bring such names to Brno for a long time. Ironically, it was only the COVID situation that gave us the space to realise the vision,” explains artistic director Marie Butula Cichá. The list of performers associated with iconic clubs like Berghain, Fabric, Hard Wax or Tresor is topped by Marcel Dettman (DE). The German DJ and producer is considered one of the most influential figures in contemporary techno ever. Together with him, the unmistakable stalwarts Legowelt (NL), Louisahhh (U.S.), but also fresh names like Black Lotus (DE) and Third Son (UK) will be featured.

Selected events of the autumn season 2021: