Flutist Martina Komínková is preparing a multi-genre project The Prophet and the Wind. She seeks support at Hithit 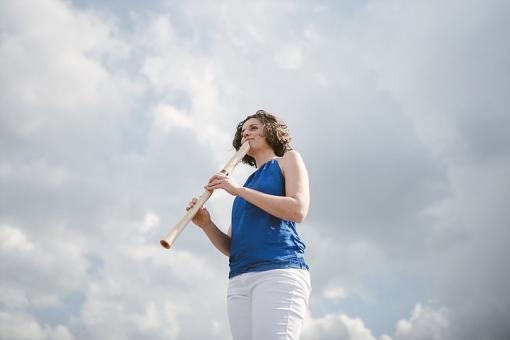 The flute player and teacher Martina Komínková is currently preparing a project entitled The Prophet and the Wind, based on the novel of the same name by Italian writer Stefano Biavaschi. The author of the music and the key  protagonist is Komínková herself. Two premières await the project, one in her hometown Brno and one in Italy. Komínková is now looking for financial support on the Hithit web portal, where you can contribute until 29 May 2019.

The Prophet and the Wind tells a story of the prophet Nathan, a flute player who played to people and pleased them with music. One day he lost his inspiration and the meaning of his mission. It is particularly about the internal struggle that the upcoming project is talking about. The first part of the story is dominated by three dark elements: Pain, Clouds and Oblivion. In the second part, however, everything turns to good, Nathan starts to see the truth, and darkness is replaced by Knowledge, Truth and Freedom. The atmosphere of the whole story is enriched by individual video projections. Part of each performance will also be a partial musical improvisation. Komínková will play a number of flutes, sing, but also use unconventional instruments such as the Koshi chimes. In addition to improvisation, she also uses music equipment and Delay effects. Excerpts from the book will be heard through an artistic recitation. Everything comes under the direction of Emanuele Pantano.

The Italian premiére of the project is announced to take place on 2 June 2019, the Czech one in the autumn 2019 in Brno. You can support the project until 29 May 2019 here.

Martina Komínková / photo from archive of the artist