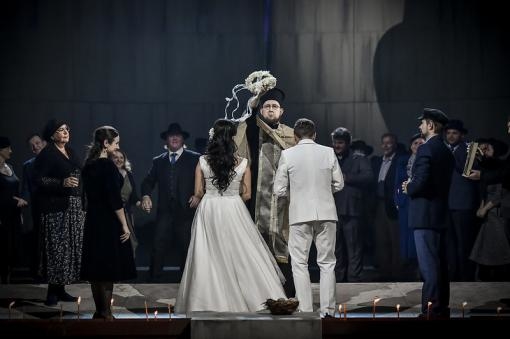 The great choral opera – The Greek Passion by Bohuslav Martinů – returns to the stage of the Janáček Theatre. Members of Český akademický sbor (Czech Academic Choir) and Dětský sbor Brno (Brno Children’s Choir) will join the ranks of the Brno National Theratre´s Janáček Opera choir. The musical production is the work of conductor Robert Kružík. Directed by Jiří Heřman, for whom The Greek Passion is the third production of Martinů’s work, after The Miracles of Mary and The Epic of Gilgamesh, the piece will feature, in the main roles, soloists of the Brno National Theratre´s Janáček Opera as well as its regular guests Peter Berger (Manolios), Pavla Vykopalová (Katarina), Jan Šťáva (Grigoris), David Szendiuch (Fotis), Ondřej Koplík (Yannakos) and others.

“What I personally found most interesting about this story is the inner transformation of a person who is assigned a role in the Passion plays. Watching how the individual characters identify with their assigned roles, how they cope with the weaknesses of the human ego and internally free themselves from it, is inspiring for me. Martinů captured this human tragedy in his music as brilliantly as he did the mighty Mother Nature. The music is often lucid and full of light, giving us hope that never ends,” says the director of the upcoming premiere Jiří Heřman.

Bohuslav Martinů’s opera work has a permanent place on the stage of the Brno theatre, where his early ballets and many of his operas were first performed in world premieres. The premiere of his top and last operatic work The Greek Passion was originally planned for the 2019/2020 season, which marked the double anniversary – 60 years since the death and 130 years since the birth – of this leading Czech composer.

Martinů, who himself experienced the fate of a refugee, created a great piece of work about the power of faith based on the novel Christ Re-Crucified by Greek writer Nikos Kazantzakis. Martinů used to say that he had no desire to redress the world, yet themes touching the innermost essence of humanity and faith are an essential part of his work. His music springs from the places where he was born, and despite all his experiences as a world traveller and later as a forced emigrant, he always returned home to Polička, to the hills of the Bohemian-Moravian Highlands, and filled it with a deep understanding of everything hidden in man. Martinů spent several years working on the opera, taking on the difficult task of reducing the more than 400-page novel to a libretto. The final version, which was to be performed at the unrealised London premiere, was eventually reworked by the composer. The Greek Passion thus offers stagers a choice of two full-fledged versions of the work. The production to be presented in Brno chose the so-called Zurich version, completed in 1959, with the original English libretto. The premiere is set to take place on 5 November 2021, starting at 7 p.m. at the Janáček Theatre.