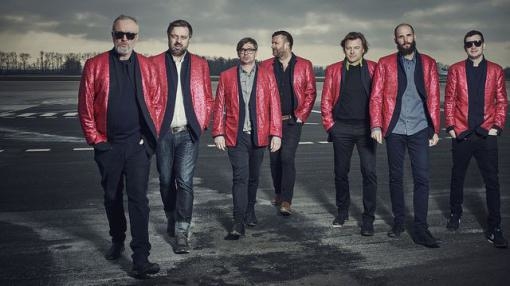 For the first time ever, the artistic ensemble Kafka Band will bring its music and literature performance entitled Amerika to Brno. The project has been inspired by fragments of the unfinished novel of the same name by Franz Kafka. The seven-member line-up of the ensemble, headed by Jaroslav Rudiš and Jaromír Švejdík, will also present twelve brand new compositions in  the Fléda music club.

Kafka Band has a successful tour of Germany behind itself. The Frankfurter Allgemeine Zeitung daily newspaper wrote: “The musical performance of the Czech writer Jaroslav Rudiš and the comic book artist Jaromír 99 in their mix of literature, video and comics, is a real experience.”  The Kafka Band's album Amerika, inspired by the unfinished novel The Man Who Disappeared (America) by Franz Kafka, reflects the oldest global phenomenon of the 20th century: the rapid rise of masses and the associated ubiquitous sense of alienation and loneliness in the crowd. The book, the performance, the album and the video clip to the song People Get Lost mirrors unmercifully the effort of the main character to cope with new reality.

However, compared to the previous show The Castle, America is much closer to a classical concert sound than a theatrical show or a music and literature programme. Greater emphasis put on the music component is also evident from the album itself, with the release of which  (March 2019) Kafka Band, originally a temporary group, has become a real band releasing a serial studio record. Despite the fact that at the onset of the project, similarly to Das Schloss [The Castle] there was collaboration with the German Theater Bremen, the album does not feature  solely compositions designated for theatrical performances.

Each show features video projections, behind which stands VJ Clad, the author of the video clip for the pilot single of the album, the track named America. The second clip People Get Lost goes further as regards personal experience. It is a result of the collaboration between the band and the creative digital studio BRAINZ VR and offers an interactive experience of virtual reality, which visitors to the Brno concert will be able to try out for themselves. There will be several virtual glasses available to watch the clip with Jaromír Švejdík in the lead role. Tadeáš Haager, an artist and musician, was entrusted with visual shaping of the latest clip named Gott oder Teufel [God or Devil]. “It was an opportunity for me to sort out the feeling I had always experienced when reading Kafka's books. I mean the hopeless anger at the main character, who lets himself to be fooled around with so much,” the artist commented on his cooperation with Kafka Band.

Photo from archive of the Fléda music club