Latest: Magdalena Kožená and Simon Rattle will Perform Together in Villa Tugendhat 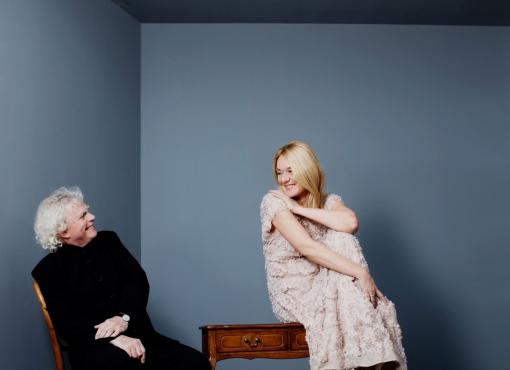 Mezzo-soprano Magdalena Kožená and her husband, conductor Sir Simon Rattle, will perform together in Brno for the first time as part of the Brno Music Marathon festival. A song recital of Kožená, arranged exclusively for this evening from compositions by Czech authors, will be accompanied by Simon Rattle on piano. The concert takes place in Villa Tugendhat, but it will also be available for viewing in the courtyard of the Governor's Palace (Místodržitelský palác), in the "Scalní letňák" cinema and in other selected cinemas.

"The atmosphere of a home concert in the unique ambiance of Villa Tugendhat, moreover held in my hometown, charges the whole performance with strong emotions. I included in the programme some songs that accompanied me while studying at the conservatory, and a lot of them have a folk tune or lyrics. I have the innermost relationship with them, because they not only reflect the enormous wealth of folklore creativity of our region, of which I am rightly proud, but they also remind me of the happy moments of my childhood and youth," says Magdalena Kožená.

Her husband, Sir Simon Rattle, also emphasises the unusual venue of the concert: "Of course, I read The Glass Room as soon as it was released. And I was in Villa Tugendhat with our first child fifteen years ago when Magdalena was photographed there. I spent most of the afternoon in the beautiful garden with a stroller, instead of admiring the interiors of the building, the extraordinary story of which I remember till this day. I'm looking forward to playing there!" The joint song recital will take place on 13 August 2020 from 9:00 p.m. in Villa Tugendhat.

The programme of the concert was chosen by the two artists together exclusively for the Brno performance and will not be repeated anywhere else in this form. The evening with songs by Antonín Dvořák, Bohuslav Martinů, Ervín Schulhoff and Petr Eben will culminate in a selection of vocal compositions by Leoš Janáček. This concert, which has the ambition to become the musical event of the year in the Czech Republic, will also be an intimate evening, featuring works that are closest to the hearts of the two performers.

The Brno Music Marathon is the first festival that managed to bring Magdalena Kožená and Sir Simon Rattle to our city at the same time. Their performance will also remind you that Brno is a UNESCO Creative City of Music and with its inventive programming it will adhere to the Concentus Moraviae festival. The live transmission of the concert will be jointly conducted by the Scala University Cinema, the company Aerofilms and also the US company PARMA Recordings. These partners and the Facebook profiles of the Brno Music Marathon, Magdalena Kožená, Villa Tugendhat and others will enable thousands of listeners in the Czech Republic and abroad to watch the concert. The evening will be hosted by David Mareček, General Director of the Czech Philharmonic: "It will be a gift for me that my native Brno has long deserved. It is as if we find ourselves at a private tasting of the best wines in the world. Instead of wine, we will only taste music presented by two masters of their art in the unique ambiance of Villa Tugendhat." The concert is jointly organised by Brno - UNESCO City of Music, the Concentus Moraviae festival and Villa Tugendhat.

Programme of the concert:

Když Bůh byl nejvíc rozkochán (When God Was in the Happiest Mood) Op.3/4

National Songs and Dances from the Těšínsko District WV 120