Latest: Zdenka Kareninová, a long-standing soloist of the Janáček Opera, has died 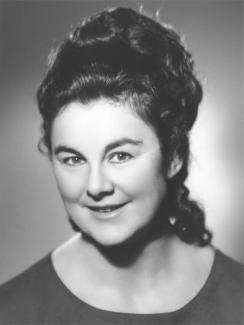 Today, 15 February 2020, Zdenka Kareninová, a long-standing soloist of the Janáček Opera in Brno, has died in her age of almost 90 years.

Zdenka Kareninová was born on 1 March 1930 in Prague. However, much of her artistic life was  associated with Brno. She was a member of the local opera for 22 years. She studied singing at a conservatoire in the class of Konstantin Karenin (later to become her husband) and at the Academy of Performing Arts. She got her first theatre engagement at the South Bohemian Theatre in České Budějovice. She was also a soloist of the Army Artistic Choir. She first came to the Brno Opera as a guest artist (Senta in The Flying Dutchman, Ortrud in Lohengrin). From 1967, however, she became a member of the ensemble and subsequently a soloist. Here, she rendered roles such as Libuše, Milada in Dalibor, Jenůfa or Kostelnička, Katya Kabanova and many others – from the world repertoire let us name roles such as Aida, or Elizabeth in Don Carlos. Her last role with the Janáček Opera was Agnes in The Two Widows. Later she worked as a teacher at JAMU and DAMU. In 2015 she received the Thalia Award for her lifelong mastery of opera. Zdenka Kareninová has died on Saturday, 15 February 2020.