Marathon of Music Brno 2020: The festival tailored for the city attracts with a number of new features 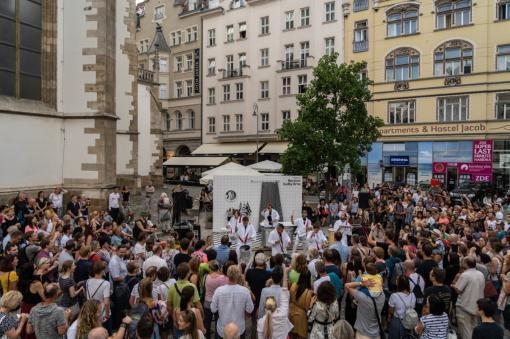 A summer walk around Brno's downtown where music sounds at every step? That was and will be the Marathon of Music Festival in Brno. The centre of Brno will resound with the festival already for the fifth time this August. The programme promises a great variety of genres, reputed names of artists, but also space for young talent. Once again, music will be played at unconventional venues and in rooms by Kateřina Šedá; concerts will newly be staged, for example, in a kitchen storage room or a in a children's room.

The Marathon of Music Brno 2020 can be interesting for every listener with its variegated nature – in fact, everybody can make a mix of the programme according to their taste. This year's dramaturgy is being compiled by personalities from the Brno music scene such as Přemysl Štěpánek, Jan Polyak, Josef Buchta, Oldřich Vojáček, Mária Hvozdecká, Hana Bartošová and others. This year, the festival will take place from 13 to 16 August 2020. The mix of music genres is represented this year by big beat, groove, dance music, opera, folklore, world music, classical music and pieces from musicals.

Hausopera is preparing another site-specific opera Hra o Malinu [The Game of Raspberry, Malina meaning a proper name as well as a raspberry in Czech] which will take place directly at Michal Ženíšek's bookstore; the true marathon will be enhanced by the traditional Piano-štafeta [Piano Relay Race] directed by David Mareček. We will see an appearance by Barbara Maria Willi and this year there will also be the Nekonečné varhany [Never-ending Organ] show in the Jesuit Church. Indigo Quartet will celebrate their third decade of playing together. The celebration will be launched by a retrospective concert with guests – chanson singer Andrea Burešová and composer and pianist Zdeněk Král, who will also prepare his own evening. A round anniversary was celebrated this by the Indies music publishing house, which will commemorate Jitka Šuranská and its Saturday programme will be dedicated to the theme of a female voice and heart. The dance scene will anchor on the Dominik Stage on Friday, Jan Bendig will perform on the Django stage, and the Elizabethan Stage at Divadlo Husa na Provázku [Goose on a String Theatre] will be full of folklore. One concert after another await listeners on the Guest Stage in the courtyard of the Old City Hall. This year the Marathon will also welcome a new Groove Scene to the festival family and introduce musical melodies. There will also be a number of young talents, including pianist Radek Bagár and his solo debut at the festival. Children's programme and theatre performances will traditionally be taken care of by the Na prknech, dlažbě i trávě [On the Planks, Pavement and Grass] festival, which in the Moravian Square will offer special puppet playground called Loutkoviště for children and their parents, Break Dancing for teenagers, a Gastro Theatre for lovers of fine dining, and a lot more.

The festival will traditionally feature the Bezuliční busking [Streetless Busking] directed by Kateřina Šedá. Artists can sing in a kitchen or in a bathtub, as well as on a monstrous stage. Buskers will see a move to a larger space in the summer. Unlike last year, in fact, a whole apartment will be built in the streets of Brno and besides a bedroom on Česká Street, a living room in Myší díra [The Mouse Hole – an old pedestrian tunnel under the main railway station],  a bathroom in Jakubské Square and a kitchen behind the Letmo shopping mall, it will be possible to get settled in a children's room where children's busking will be launched for the first time. This year, several concerts will also take place in a kitchen storage room. Visitors to the festival will have the opportunity to celebrate birthdays in the children's room, to propose to the fiancée girlfriend in the kitchen storage room or to take a bath together in the bathtub in Jakubské Square.

More information can be found on the website of the festival.

Photo from archive of the festival 2019