News: Acoustic model of the hall of the Janáček Cultural Centre arrives in Brno 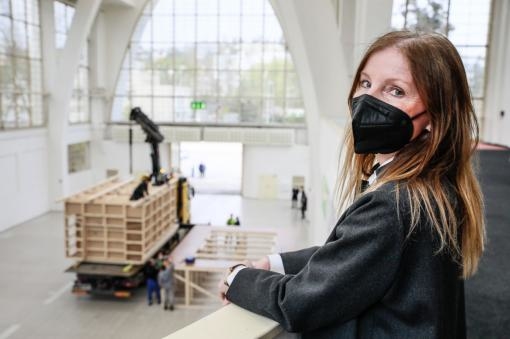 A miniature, but a faithful copy of the Janáček Cultural Centre at the scale of 1: 10 shall serve for testing the audio parameters of the project. The model arrived at the Brno Exhibition Centre today, where a team led by Yasuhisa Toyota, a world-renowned acoustician, will carry out acoustic measurements and check calculations that have been made.

“The 1:10 scale model of the Janáček Cultural Centre was assembled at a workshop dedicated to acoustic models based in Mnichovo Hradiště, a task that was underway since last autumn. In addition to the acoustic experts, the job required the input of designers, architects, modellers, joiners and carpenters. The model is 5 metres by 3.5 metres in size and 3 metres in height,” said Markéta Vaňková, the Mayor of the City of Brno, adding: “Receipt of the model by the City of Brno is a major milestone on the road map of this strategic project. We’re thinking of how to make it available to the public, at least during the construction period, once all the checks have been completed and the model is in the hands of the investor. Ideally, this could include presenting it as the basis for a new hall for Brno, along with constantly updated information on the progress of the construction and important facts. We’re now looking for a suitable venue to exhibit it.

The model is used to accurately measure the acoustic parameters of the eventual hall. "The hermetically sealed model of the hall is filled with nitrogen; this gas has the capacity of distributing sound in a way proportional to the scale of the model, which is exactly ten times slower than air. The aim of the measurement is to corroborate if the calculated shape of the hall and the intended materials give rise to ideal acoustics. Over 1,200 small figurines made of extruded polystyrene shall be placed inside the model during tests, thereby simulating the acoustic absorption of an audience. This is because even the presence of people changes the acoustic qualities of the space”, explained Tomáš Koláčný, the Deputy Mayor of the City of Brno. 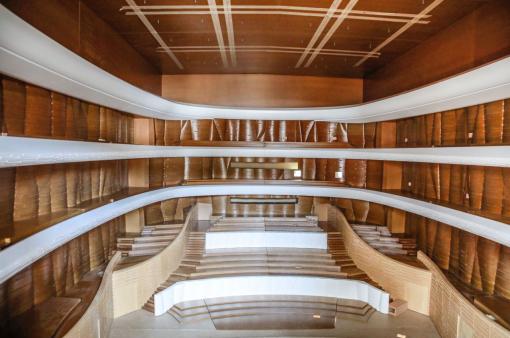 The internal space of the model

The model is made of wood in such a way that it accurately adheres to the characteristics of the materials intended for use – even to the extent of suitable varnishes and the number of coats of such varnish. “In this regard, the reflection coefficient, absorption, sound reduction index and length of reverberation are key factors. The aim of the tests is to achieve perfect results for each and every seat in the space. In essence, making sure the sound is experienced in the exact same way at each individual seat”, noted Marie Kučerová, Director of the Brno Philharmonic.

“Preparing the acoustic model and then working with it is something quite special in the Czech Republic. Since the very beginning of the construction project, the development of the model was considered a prerequisite. The acoustics will be tested for approximately three months. Based on the results of the measurements, the hall’s acoustic qualities are then verified, and its parameters adjusted as necessary”, added Marek Fišer, Councillor of the City of Brno for Culture.

“The model is based on the advantage from an acoustic perspective of an architectural solution devised by the team behind it – the Ateliér Brno, applying an invention of the architect David Přikryl in combination with the principle of the Voronoi diagram (a mathematical principle by Georgy Feodosevich Voronoy), which puts the seemingly chaotic arrangement of acoustic surfaces into mathematical and geometric order. This principle was enthusiastically adopted by Yasuhisa Toyota’s team of acoustic experts, and has been employed in the model,” commented Petr Hrůša, a member of the project team of the Janáček Cultural Centre.

Another part of the documentation required to carry out construction has also been submitted – specifications for a concert organ – has also been submitted, in order to commence the process of preparing a tender for a constructor of the instrument. This process for a tender is planned to get underway in the summer; the tender itself shall be ready once the completed implementation documentation for the construction work has been submitted and checked, which is expected to happen in November 2021. The expected start date of the works is the end of the first half of 2022. Last week, members of the General Assembly of the City of Brno approved the submission of an application for a grant from the sub-programme entitled Podpora reprodukce majetku regionálních kulturních zařízení, církví a náboženských společností (Promoting the Reproduction of Assets of Regional Cultural Institutions, Churches and Religious Communities), requesting 600 million CZK. It is at this amount that the State is assumed to participate in the construction work. “The City itself, as the applicant for the grant, should pay more than 48 % of the total cost, which is in excess of 960 million CZK; Brněnské komunikace (the Brno Communications Company a.s) is also included in the projected structure of the funds to be spent, sharing in it to the extent of 17 % of the total amount, i.e. over 330 million. This latter amount pertains to money spent to fund stage 1 of the project, i.e. an underground car park,” said Markéta Vaňková, the Mayor, earlier, adding that if everything goes according to plan, the building could open at the end of 2024.