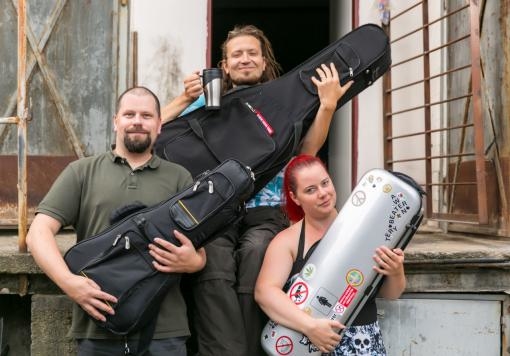 The single Přání (Wish) by the Brno-based Nebeztebe band presents their upcoming album Zásobování duše (Supply of the Soul).

The single was released on the web at Supraphonline.cz and on YouTube, where, in addition to the song itself, there is also a video clip. In the ballad Přání (Wish), Nebeztebe combined the silent New Year´s Eve poem by Martina Holánková with the New Year's lyrics and music by the band's frontman Štěpán Sundream. "Přání (Wish) is the most beautiful proof of the creative power of our minds. It prevents change and is the most intimate gift we can give to ourselves and others. At the turn of the calendar, we decided to open an inconspicuous New Year's story that can touch the heart and soul," says Štěpán Sundream. In addition to Přání (Wish), Nebeztebe will offer another eight songs on its multi-genre album. Among them, for example, the instrumental song Robin v dešti (Robin in the Rain), the almost hip-hop Zvonkohra (Carillon), the soaring final opus Racek (Seagull) and the final dance Srdcovka (Heartbeat Song). The individual songs are connected by interludes and, in addition to Czech, English and Russian will also be heard on the album. "The album grows from darkness and dark to dawn and has its grand finale. Supply of the Soul has a turning point in it, which comes together with the last singing in the single Přání (Wish),” adds Štěpán.

For several years now, Nebeztebe has been building its own sound world, combining elements of acoustic, beat, folk, fusion and pop with the composition of classical and film music. With their fragility and freedom, their new songs belong to the imaginary creative space of foreign authors such as Sting and Enya, and from domestic ones, Dan Bárta & Illustratosphere or Roman Dragoun. In the past, the band has released singles such as Něžné přepadení (Gentle Assault), Cikánská (Gypsy Song) and Babylon (Babel). Nebeztebe became more widely known with their success at the oldest Czech music “Porta” festival, where in 2013 they won the South Moravian round and two years later the national round. The basis of this musical trio is the author, singer and multi-instrumentalist Štěpán Sundream, who also plays guitar, bass and rhythm line. Above them, Tereza Šlahařová's singing grows into vocal ensembles, and her string sections on the violin show a fully utilised classical music education. In line with this, the mandolin of Jan "Yetty" Vrtěna is heard, so with his experimental approach, he lets the music get to a bigger rock at the right time. However, the current Nebeztebe does not end there. While working on the album, other electronic sounds and effects from the workshop of producer Honza Shanny Fňukal were added to the original sound, while mastering is the work of Boris Carloff.