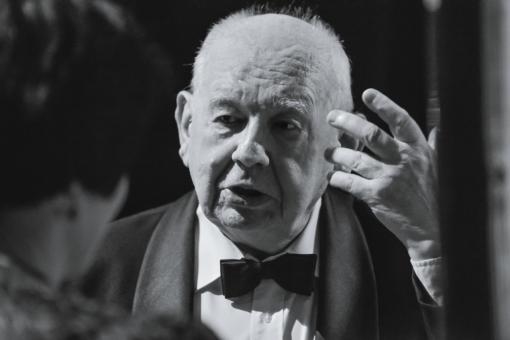 On the occasion of Richard Novák’s ninetieth birthday, the NTB’s Janáček Opera has prepared two concerts. Novák’s significant anniversary will be commemorated tomorrow with a song recital in the Mozart Hall of the Reduta Theatre, where he will perform alongside pianist Ivan Klánský. In December, a festive concert will take place at the Janáček Theatre.

Richard Novák turns 90 on 2nd October. For his chamber recital he personally chose songs by Johannes Brahms and invited the legendary pianist Ivan Klánský. The festive concert on 11 December at the Janáček Theatre will feature Novák’s famous operatic roles, accompanied by the NTB’s Opera Orchestra under the direction of conductor Jan Štych. Along with Novák, soloists Pavla Vykopalová, Peter Berger and Jiří Brückler will perform, as well as the choir of NTB’s Janáček Opera. „We cannot celebrate the beautiful jubilee of Master Richard Novák in any other way than through music. His art is an endless inspiration to us all, speaking to us truthfully and always with a spark of life. The two extraordinary concerts on the occasion of the Master’s 90th birthday, at which he will perform in person, are a great musical feast for us and a blessed meeting with this unique artist closely connected with the NTB’s Janáček Opera and the city of Brno,” says Jiří Heřman, artistic director of the NTB’s Janáček Opera. The song recital is announced for Friday, 24 September at 7 p.m. with the Mozart Hall of the Reduta Theatre being the venue.

Richard Novák was active as a soloist of the NTB’s Janáček Opera for 38 years. During that time he also made guest appearances at theatres in places such as Paris, Venice, Lisbon and Madrid. In addition to the classical repertoire, he also sang works by contemporary Brno composers, many of whom wrote compositions for him. He has also received various awards. In 1994 he received the Brno City Prize, in 2002 he was awarded the Thalia Award for Lifetime Achievement and in 2005 he received the Czech Ministry of Culture Award for his contribution to music.