Summer Menu of the National Theatre Brno: 100th Rerun of The Bartered Bride 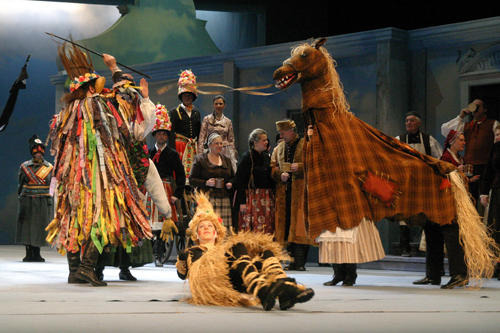 The Bartered Bride by Bedřich Smetana will have its 100th rerun as part of the National Theatre Brno's Summer Menu. Jitka Zerhauová, Jana Šrejma Kačírková, Jakub Tolaš as a guest and others will be starring in this Brno production directed by Ondřej Havelka.

Bedřich Smetana composed this comic opera in three acts with the writer Karel Sabina. The rural theme of the opera is based on Sabina's humorous novel Věčný ženich [The Eternal Groom]. It takes place in a Czech village where Jeník and Mařenka, two young people who love each other, live. However, Mařenka is supposed to marry the son of a rich farmer named Mícha, with whom her father is in debt. There are a number of obstacles and misunderstandings that follow. In spite of that, Mařenka eventually gets to marry Jeník.

The production was created under the direction of Ondřej Havelka. Its 100th rerun is scheduled to take place on 9 August 2020 at 7:00 PM at the Janáček Theatre.

The Bartered Bride / photo from archive of National Theatre Brno