The Brno Music Marathon Festival Is Starting on Thursday. It Will Feature over 130 Concerts and 300 Artists 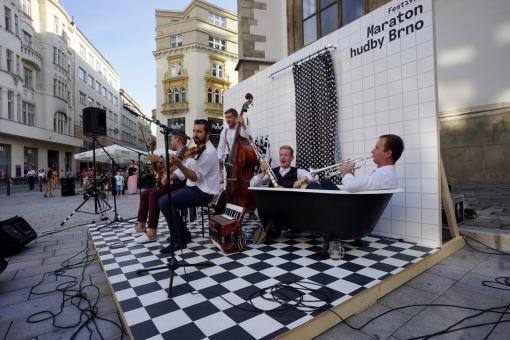 For the fifth time already, the centre of Brno will be transformed into one big music stage. From Thursday to Sunday, the multi-genre Brno Music Marathon festival will take place here. The programme will surely please  fans of rock, pop, groove, dance music, opera, folk, ethno, world music, classics or musicals. Brno is the only UNESCO City of Music to welcome 300 musicians in our country, among others, for example, Magdalena Kožená, Katarína Knechtová or Jan Bendig. You also should not miss Pianoštafeta, The Endless Organ and concerts in street rooms of Kateřina Šedá.

The opening of the festival is announced to take place on Thursday, 13 August from 5:00 p.m. on Jakubské náměstí Square. Pavel Fischer & Jakub Jedlinský will appear  in one of the six rooms of Kateřina Šedá; their show will be followed by Ivan Herák's CM at 7 p.m. On the following days, visitors to the festival will be treated to dozens of live performances, concerts and shows at both traditional and unusual venues in the centre of Brno. Music will be played on city squares, in clubs, in courtyards, in a park, at the Town Hall, in cellars, at the castle, in the House of Arts, in theatres, in a cabaret, in a book shop, and in the famous functionalist-style Villa Tugendhat. The festival will build the Dominik Stage on Dominikánské náměstí square, the Anoda+ Stage on Moravské náměstí square or Indies Stage in the atrium of the Divadlo na Orlí theatre. You can relax in the Chill Out Zone on the 4th floor of the Brno Market House (Tržnice Brno), and you can obtain information at the Brno Guest stage in the courtyard of the Old Town Hall. The Brno clubs Cabaret des Péchés, Eleven Club, Kabinet MÚZ, Music Lab, Metro Open Air and Ponava Cafe will also participate in the programme. Jazz musicians  from Hanover, a partner UNESCO Creative City of Music, will also contribute to the programme, and the theatre line will be complemented by the festival Na prknech, dlažbě i trávě (On the Boards, Pavement and Grass). The Brno Music Marathon Festival will be running from 13 to 16 August 2020 in the centre of Brno.

For several years now, the so-called Bezuliční busking (Streetless Busking) has been a special feature of the Brno Music Marathon. Street musicians, commonly called buskers, will not perform directly in the streets during the festival, but in other special places. For the second year in a row, this will be the case of the street rooms of the visual artist Kateřina Šedá, of which there will be six this year – a living room, a bedroom, a bathroom, a children's room, a kitchen with a pantry and a garage. Well-known as well as  less-known buskers will be waiting for you there, and for the first time in the history of the Brno Music Marathon, children's busking will also be staged.

The traditional components of the programme include Pianoštafeta  (Piano Relay Race) in the Alfa Passage, Nekonečné varhany  (The Endless Organ) in the Jesuit Church or street performances by barrel organ players, which festival visitors will be able to enjoy this year as well. The Brno Music Marathon will be complemented by a theatre line this year as well, consisting in the Na prknech, dlažbě i trávě (On Boards, Pavement and Grass) festival. A novelty, on the other hand, is the Marathon Music Tour of four places, the Club Stage of the festival or the opening of the brand new Metro Open Air on Poštovská Street for the Balkan night and the Groove stage.

The festival programme will also feature the music event of the year – the opera singer Magdalena Kožená and her husband, conductor Sir Simon Rattle, will perform together in Brno for the first time. The concert, which will take place on 13 August at 9:00 p.m. in the exclusive settings of Villa Tugendhat, was sold out in one minute. However, the festival organisers have arranged for it to be available for viewing on the Facebook profile of the Brno Music Marathon, and those who appreciate high-quality picture and sound can go to the "Scalní letňák" cinema in the courtyard of the Governor's Palace (Místodržitelský palác). Admission is free, but tickets must be collected  at the Scala cinema box office, where the programme will also take place in case of bad weather.

House of the Lords of Kunštát

Church of the Finding of the Holy Cross

The Endless Organ in the Jesuit Church

(Boards in the  Goose on a String Theatre)