The Brno Philharmonic will launch its 65th season and continue its collaboration with Dennis R. Davies 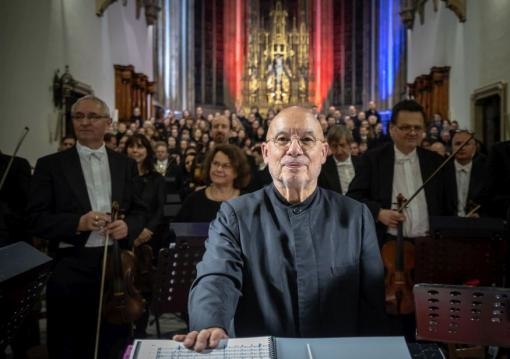 The Brno Philharmonic will launch its 65th season with Arvo Pärt and Anton Bruckner on Petrov. The chief conductor and artistic director Dennis Russell Davies, who will conduct the concert, is entering his third season in Brno this year. Davies has signed an extension to the cooperation, so his contract will now last until 2024.

Marie Kučerová, director of the Brno Philharmonic, described the past cooperation and extension of the contract with Dennis Russell Davies: "Under his leadership, the Brno Philharmonic is experiencing a happy era of focused work at the highest level. That is why I am glad that an extension of the cooperation with Maestro Davies has been agreed for another two years".

Dennis Russell Davies is happy to work in Brno. "I gladly accepted the offer. Our first two seasons together were beautiful, enriching and along with my wife Maki Namekawa we have really fallen in love with Brno and everything it has to offer," commented Davies on the extension. His contract will therefore last until 2024 with an option for the next two years. According to him, the beginning of the season will not be quite easy. "We are facing a huge challenge. Not only as a leading orchestra in this country, but also as a civilised society that is coping with an unpredictable pandemic. The health and safety of our musicians and audiences comes first for us," he added.

The season will be opened by the Brno Philharmonic in the Cathedral of Sts. Peter and Paul. "It's interesting that we play Pärt exactly on the day he celebrates his 85th birthday," Kučerová remarked. At the beginning of the evening, his composition for string orchestra and bells Cantus in memoriam Benjamin Britten will be featured. It is one of the first works in which the author definitively detached himself from the avant-garde and manifested his new style based on simplicity, diatonic scales, staticity and inspirational support in medieval music. "Pärt called this style tintinnabuli from the Latin word tintinnabulum, meaning a bell, and characterised it as a voluntary escape into poverty," said the dramaturge of the Brno Philharmonic Vítězslav Mikeš. The opening concert is to take place on Friday 11 September from 7:00 p.m. in the Cathedral of Sts. Peter and Paul; there will be no intermission.

Anton Bruckner never heard his Symphony No. 5 in orchestral form. In 1887, Bruckner's supporter, Franz Schalk, planned to produce his own arrangement for two pianos, but Bruckner did not agree with his modifications and even threatened him with the police. The premiere of the orchestral version took place in April 1894 under the baton of Schalk, but without the presence of the composer who was of poor health at the time.

Dennis Russell Davies/ photo from archive of the Brno Philharmonic