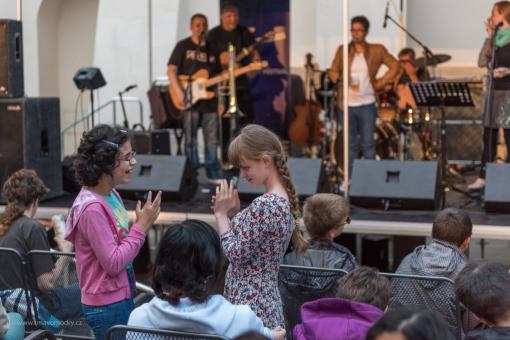 The festival of blind and partially sighted children and youth enters its 30th season. What originally was a musical show of visually handicapped children has eventually become a several-day international festival, which brings the "dark blue" reality to the general public.

The founder of the festival was an ophthalmologist from Brno, Zdenka Kafková, who found a great partner in Šárka Tryhuková († 2017) from the TIC BRNO, which is an organisation that has since that time assumed responsibility for the organisation of the event. Together they formed the heart of a preparatory group, thanks to which this year's Dark Blue Festival can celebrate its 30th anniversary. Another key personality behind the festival is Hana Bubeníčková from Tyflocentrum, which complements the festival with an accompanying programme of a technical nature. In addition to guide dogs, nowadays there are technologies that make life easier for the visually handicapped. This synergy gradually resulted in an event format, which consists of a musical show of blind and partially sighted musicians, expert seminars treating the life challenges of the blind and partially sighted, technological developments in this field, and an experience day for the general public, where the two communities become interconnected.

This year, four dark blue days are divided into Thursday and Friday when the festival is open to the public, and Saturday and Sunday, when the programme only counts on the blind and partially sighted. The festival will find its main venue on the Kraví hora hill this year, although it will occasionally jump to the centre of the city as well. Visitors can look forward to workshops, a musical show, a conference, a charity concert, and a dance party under the star-lit sky with Malalata promises to be the ultimate entertainment. At the same time, it will be the last ever opportunity to have a coffee in the POTMĚ [IN THE DARK] café, which then plans to shut down.

A unique café where the roles of seeing and blind people are changing. In a completely darkened area you will be seated and served by blind waiters with the promise of a drink you have never seen before. The proceeds of the spending will be credited to the account of the Světluška [Firefly] charity to help children and adults with visual impairments.

19.30 dance party under the star-lit sky

The DJ duo Malalata is gradually gaining reputation not only in Europe but also further around the world. On Kraví hora, it will treat us to its own set of fusion of balkan beats, gypsy music, cumbie and reggae, which will turn every listener into a dancer in an instant.

9:00 workshop for the blind and partially sighted

Digitarium of the Brno Observatory and Planetarium

Organised by TyfloCentrum Brno, o.p.s., for people working in social services, education, employment services, health care, leisure time, local government, and also for the general public. Organisations of the South Moravian Region providing services to people with severe visual disabilities will be introduced, and possibilities of cooperation and improving the quality of this care system will be shown.

Meet the obstacles that blind and partially sighted people overcome in everyday life. How do they sort clothes by colour, pair socks, pour drinks into a glass, or sign? Try out games for the blind, buy original HapAtelier workshop products, and admire a guide dog that will show its training.

14:00 show of children's music ensembles and singers with visual handicaps

Agora 2019 – professional educational event on information and communication technologies for the visually impaired. Organized by the Teirersiás Centre of Masaryk University.

Photo from FB of the festival