The Hausopera Association continues its Trilogy for the City 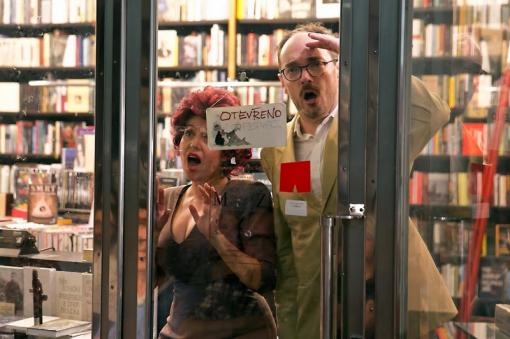 Hausopera will present two short operas connected with important functionalist monuments in Brno. The performances will take place in the 'Zemanova kavárna a cukrárna' ('Zeman's Café and Confectionery Shop') and in the 'Knihkupectví Michala Ženíška' ('Michal Ženíšek's Bookshop'). The venues, well-known to everyone, will appear in a new light and context during the opera shows. Jiří Nekvasil undertook the directing of both pieces.

In 2018, many people visited the swimming pool of Lázně Rašínova (Rašínova Spa) and watched the Last Polo. In a nostalgic opera about a broken heart, a guilty conscience and forgiveness, artistic swimmers were also given space alongside three vocalists in swimsuits. The work by the composer Marko Ivanović and librettist Josef Škarka raised great interest thanks to the attractive ambiance of the venue, the special elaboration of the theme and the use of the special acoustics of the swimming pool. The authors of the two new pieces of this year, Věčná slečna Bledá (The Eternal Miss Pale) and Hra o Malinu (The Game of the Raspberry), are in the former case Markéta Dvořáková together with Ivo Medek, while the latter was composed by Lukáš Sommer; the librettos were  written by proven author Josef Škarka. The splashing of water and the long reverberation of the Last Polo will be replaced by the smell of coffee and the rustling of freshly printed pages.

Věčná slečna Bledá will set out on her pilgrimage in the 'Zemanova kavárna a cukrárna' on Josefská Street. The longest continuously functioning business of its kind in Brno will become the stage for very peculiar events experienced by an inconspicuous business traveller during a single afternoon. He will be accompanied by a pale waitress, talkative teenagers and the retro atmosphere of the place, which was designed in 1936 by the Brno architect Vítězslav Korn for the confectioner Josef Sedláček.

"Working on the new opera addressed me with uncertainty," says the composer Markéta Dvořáková. "We stumble between dream and reality, it is not clear where is 'here' and where is 'there', and who is actually Bledá, the pale waitress. The spectators will find the answers themselves, but they must engage their fantasy and imagination, because what is seen on stage is just as important as what is hidden behind it. I am entertained by the inner world of Mr. Bartoš and next to him the absent-minded Bledá, who lives her own story. With the instrumental arrangement, Ivo Medek and I tried to get as close as possible to the character of the hits of the 1930s, in order to tune in with the well-preserved interior of the functionalist Zeman's confectionery."

After thirty minutes with the Eternal Miss Pale, the venue of the evening will move to the Alfa Palace, which was completed in 1937 according to a design by Bohuslav Fuchs.

Hra o Malinu will take place in the shop of the legendary bookseller Michal Ženíšek, who will appear in the opera himself. The audience will be treated to an emotionally tense story about trying to save the business from bankruptcy, while an old crime is revealed. The audience will see the story from chairs located in the Pasáž Alfa (Alfa Mall), the sound will be conveyed by wireless headphones. The composer Lukáš Sommer wishes "that everything looks natural and as if happening inadvertently, and that the caricatures of human characters do not look malicious in any way. So that everyone can find a piece of themselves in the pensive bookseller, his talkative wife and the cynical dealer. Josef Škarka's playful libretto, beautifully scathing towards weedy words, amused me at every stage of my work. I am glad that I was able to add a piece of my music to Josef's unique text and to participate in his project. Thanks to him, opera is becoming a slightly livelier, pulsating genre."

Jiří Nekvasil undertook the direction of both operas. What makes his work for Hausopera unique for him? "The work with the team of creators who got engaged in the Trilogy for the City project is particularly beautiful. It's some kind of a 'hausfamilie'. Regarding theatre, I enjoy watching when something is being created and waiting for it to take hold. I think Hausopera has been really good at this so far."

'Věčná slečna Bledá' will have its world premiere on 16 October 2020. 'Hra o Malinu' has already had its first run at the Řehoř Samsa Bookstore in Prague and three performances at the Michal Ženíšek Bookstore as part of the Brno Music Marathon 2020. Tomáš and Zuzana Rusín have made the stage and costume design of the two operas, while the lighting design is the work of Barbora Jágrová and Pavla Beranová. The coupled shows will begin on 16, 17 and 18  October 2020, always at 8:00 p.m. in the 'Zemanova kavárna a cukrárna', from where, after the first part, all the people will move to the nearby 'Knihkupectví Michala Ženíška'.