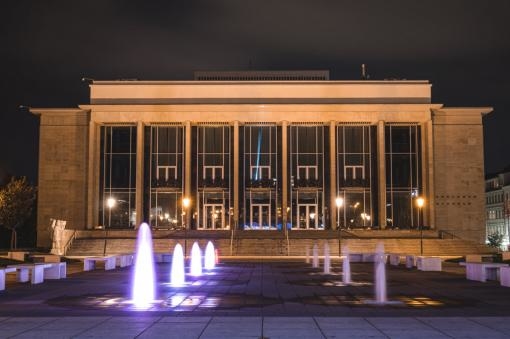 The Janáček Theatre, which is part of the National Theatre Brno and hosts the Brno opera and ballet ensembles, is celebrating 55 years of its existence. The operation of this theatre began on 2 October 1965 with a performance of The Cunning Little Vixen by Leoš Janáček.

The construction of the theatre itself was preceded by disputes, several architectural competitions and political obstacles that lasted for almost half a century. Finally, in 1958, the Stavoprojekt Brno studio, led by the architect Otakar Oplatek, was commissioned to design the theatre building. The main engineer of the project was Vilém Zavřel. Later, the architects Ivan Ruller and Boleslav Písařík were invited to work in the studio. After an introductory project of 1958, they finalised the architectural and construction details of the theatre by the end of 1963. The interiors of the theatre hall and stage were designed by Libuše Žáčková-Pokorová and Vilém Zavřel. The social interiors were the work of Ivan Ruller, and the operational part was done by Boleslav Písařík. At the beginning of 1960, preparations for the construction began, which was eventually completed in July 1965. At that time, the total construction costs reached almost CZK 100 million. The operation of the Janáček Theatre was ceremonially launched on 2 October 1965 with Leoš Janáček's opera The Cunning Little Vixen.