The Metropolitan Opera is returning to Czech cinemas, offering archive recordings in the autumn 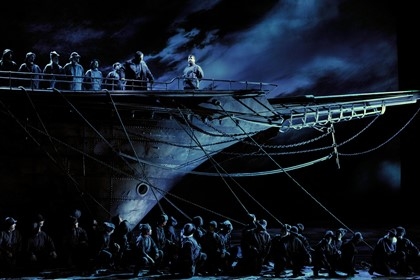 Due to the coronavirus pandemic, the New York Metropolitan Opera will not start the season until January of the following year. Traditional cinematographic broadcasts will now make use of the Met's archive. In the autumn, three classic works of Italian opera and one bonus screening are planned.

The Metropolitan Opera in New York prematurely ended its last season due to lockdown security measures. The next season will also be shortened and it is expected to start only in January 2021. This postponement will also affect the new season of the cinematographic broadcasts. The first half of the season will therefore be filled with an archive selection from the Italian opera legacy and one bonus screening. The Met will return to Czech cinemas again on 26 September, together with a new production of Wagner's The Flying Dutchman. The staging, which had its premiere just before the lockdown broke out, will become a kind of vanguard of the Italian parade. The dark, visually opulent performance was directed by Francis Girard. Sir Bryn Terfel was supposed to appear in the title role of the cursed sailor who could land only once every seven years to find love and change his destiny. Due to his health complications, his role was taken over by the Russian bass baritone Yevgeny Nikitin.

The first part of the season will be officially opened by Donizetti's classical piece Don Pasquale. The recording of the famous opera buffa was made in 2010 and Anna Netrebko, who has the power to literally control the scenes in which she appears, shines in the role of Norina. She is also supported by the lively direction of Otto Schenk, and the baton was masterfully taken up by James Levine.

Less than a month later, a big name in Italian opera – Giuseppe Verdi – will take over the movie screens. His Rigoletto was in its time haunted by censorship interventions, but the comic opera gained considerable popularity among audiences. One of the most famous operatic "hits", the aria of the Duke of Mantua "La donna é mobile" also comes from Verdi's Rigoletto. It was sung by the star tenors Enrico Caruso or Luciano Pavarotti, and the melody was inscribed into the pop culture so deeply that – with new lyrics though – it is sung by fans on the grandstands of football stadiums. In the production of the opera from 2013, the Slovak bass Štefan Kocán appears in one of the minor roles, while Diana Damrau, Oksana Volkova, Piotr Beczała and Željko Lučić star in the main roles.

This year's third broadcast from the MET will be Puccini's Tosca directed by the famous David McVicar. The production seems to be sort of defying the unfavourable circumstances; from the beginning it was hampered by difficulties such as frequent changes not only in the position of singers, but also in the creative team. Change did not avoid the conductor either – the originally engaged James Levine was replaced by Emmanuel Villaum, who currently works as the music director and chief conductor of PKF – Prague Philharmonia. Sonja Jončeva, Vittorio Grigolo, Željko Lučić and Patrick Carfizzi are starring in the title roles.