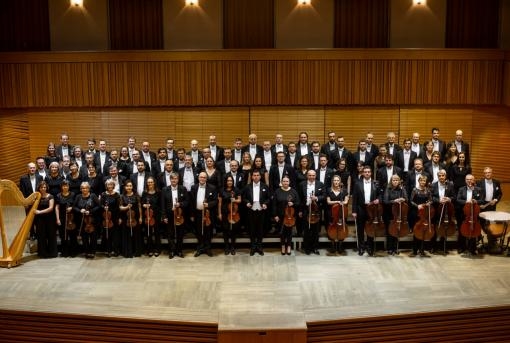 The Moravian Philharmonic Olomouc is now entering its 75th concert season, which will begin with music by the Czech composers Antonín Dvořák, Bohuslav Martinů, Iša Krejčí and Marek Keprt. The last of them wrote a composition directly for the Moravian Philharmonic. The orchestra will play it tonight under the baton of the chief conductor Jakub Klecker, with the pianist Ivo Kahánek appearing as a soloist. The concert will be broadcast live by Czech Radio on its Vltava station.

The programme of the opening concert of the 75th season was tailored to the Moravian Philharmonic – the introductory composition by Olomouc native Marek Keprt was commissioned specifically for this occasion. According to the composer himself, the work entitled Opeření, opelnění, okluznění, zmotýlnění – akustický chVějíř k 75. výročí založení Moravské filharmonie  (a set of neologisms very loosely translated as 'Feathering, Pollination, Occlusion, Smoothing – Acoustic handFan on the occasion of the 75th anniversary of the founding of the Moravian Philharmonic Olomouc')  uses the specific spatial disposition of Reduta and especially highlights the instruments in the brass section.

The second composition of the evening is the Concerto for Piano and Orchestra No. 3 by Bohuslav Martinů. Ivo Kahánek will perform as soloist; he is one of the most respected Czech pianists, as evidenced by the BBC Music Magazine Award, a prestigious prize in the field of classical music, which the artist won this spring for his recordings of compositions by A. Dvořák and B. Martinů. The opening concert will take place today, i.e. September 24 from 19:00 in the Reduta in Olomouc.

The works of Antonín Dvořák have appeared regularly and frequently in the programmes of the Moravian Philharmonic throughout its existence, especially thanks to the historical connection of Antonín Dvořák with Olomouc. This time, the opening concert will feature five parts from the Legends series. The individual compositions are characterised by narrative poetics, and some experts on Dvořák's works state that they are inspired by the ballads of K. J. Erben. The evening will conclude with a symbolic commemoration of the very beginnings of the Moravian Philharmonic, which were connected with Iša Krejčí, an important figure of the post-war Olomouc period. His Serenade for Orchestra was first performed by the Moravian Philharmonic in its world premiere on 27 May 1952, and now it will close its first concert of this season with this composition.

Bohuslav Martinů: Concerto for Piano and Orchestra No. 3 H. 316

A repeat of the concert will take place the following day, on Friday 25 September from 7:00 p.m. once more in Reduta in Olomouc.

Moravian Philharmonic Olomouc / photo from archive of the orchestra