The National Theatre Ballet will celebrate 100 years of its existence 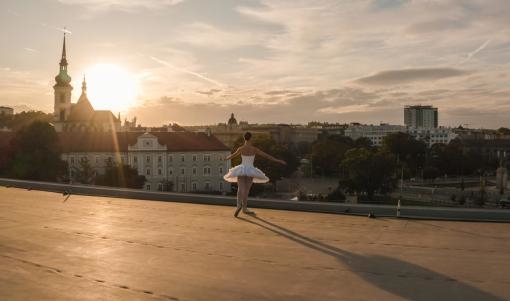 The ballet ensemble of the National Theatre Brno celebrates 100 years since its foundation this season. On the occasion of this anniversary, the ensemble is preparing a gala concert at the Janáček Theatre, featuring dancers from major European ballet companies, as well as soloists of national theatres from Prague, Bratislava and Brno. Among the guest artists there are stars such as Diana Kosyreva, Natascha Mair, Philipp Stepin, Cesar Corrales and many others.

Ballet existed in Brno theatre already before 1919, but it was not a permanent professional ensemble. At the turn of the 19th and 20th centuries, only rare performances by temporary choreographers appeared on stage. In 1916 Marie Dobromilová, a dancer from Prague's Divadlo na Vinohradech theatre, came to Brno and became a sort of first performing personality. Dobromilová brought to Brno a brief engagement of her uncle Achille Viscusi, a dancer, teacher and choreographer and former head of the ballet of the National Theatre in Prague. It was thanks to him that the traditional ballet titles Coppélia (1918) and Tchaikovsky's Swan Lake (1919) were introduced for the first time in Brno. Unlike the Prague National Theatre, which had its own ballet ensemble since its inception, the Brno National Theatre, which was only a year younger (1884), had a permanent ballet ensemble only at the end of the First World War.

The official formation of the ballet ensemble is associated with the arrival of Jaroslav Hladík, who came to Brno in 1919. Hladík formed, rejuvenated and raised the ensemble to a professional level. The ensemble gradually built up a more equal position alongside drama, opera and singspiel. At the beginning of the First Republic, Máša Cvejičová, and later the legendary Ivo Váňa Psota, took over as the Artistic Director of the Ballet until his death, three times with some breaks. The creative and dramaturgical highlight of this period was the world premiere of Prokofiev's ballet Romeo and Juliet (1938).

In the sixties the "new wave" won the place, in 1961 the choreographer Luboš Ogoun became the artistic director. After his work in the ballet, Miroslav Kůra, recognized as the greatest performing personality of the postwar era, took over as a leader of the ballet and returned the repertoire of the ensemble from contemporary dance to classical ballet. At the turn of the sixties and seventies there were changes in leadership, and eventually Olga Skálová stepped in, who led the Brno ballet until 1989. After the Velvet Revolution, the rehabilitation and re-leadership of Luboš Ogoun took place. He was gradually alternated by personalities such as Zdeněk Prokeš, Karel Littera or Lenka Dřímalová. Since 2013, NDB ballet chief has become Mário Radačovský. Guest celebrities from the world of choreography alternate in the ballet company, and the work by Radačovský himself raises its level significantly. Nowadays,  the Ballet of the National Theatre Brno is the second largest dance ensemble in the Czech Republic, currently having a headcount of 50 dancers from 20 countries of the world.

Confirmed guests of the gala concert:

Igor Tsvirko / lead soloist of the Bolshoi Theatre in Moscow

The Lady of the Camellias full of dance

The story of fateful love of the beautiful courtesan Marguerite and her sweetheart Armand, as we know it from the autobiographical prose The Lady of the Camellias by Alexander Dumas Jr., need not be largely introduced. One of the most famous novels of the 19th century has already been subject to a number of remakes, and now the National Theatre Brno ballet ensemble also came up with a new modern concept of this story of pain, passion and self-sacrifice.  more