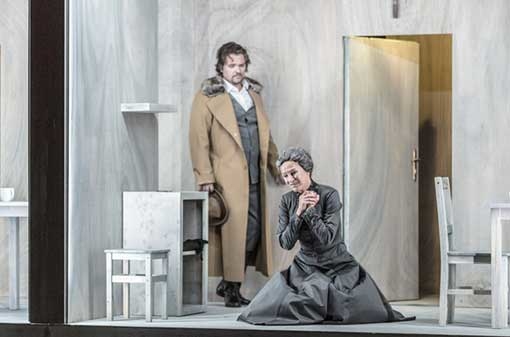 The Janáček Opera gave a guest performance with success as part of year 45 of the prestigious international Hong Kong Arts Festival with Janáček’s Makropulos Affair earlier in 2017. This time, the Brno opera ensemble is returning to the Hong Kong festival’s stage. Due to the pandemic situation, the festival management decided that foreign ensembles would be participating online – through recordings and live streams.

The initially planned performance of The Greek Passion opera by Bohuslav Martinů will be replaced with two recordings of the ensemble staging Janáček works: Her Stepdaughter and The Cunning Little Vixen; the sessions were produced in cooperation with Czech National Television.

“If the first invitation to the HKAF was a huge success for the National Theatre, the return to such a prestigious event after just three years means that the increasing artistic qualities of the theatre have tested very well in a worldwide context. Hats off to the boldness of the festival management who had to cancel the festival completely at the onset of the pandemic last year that they have put together a complete and, most importantly, meaningful, online alternative this year. I’m proud that we can take our part in it – another proof that our production can succeed not only in live performances but also online.“ Martin Glaser, Director General, National Theatre Brno.

The festival programme will include several recordings of concerts featured in the 2020 Janáček Brno Festival. There will be numerous accompanying programmes on the festival website presenting not only the performances themselves, but also the city of Brno and Leoš Janáček along with other Czech composers and their works, plus the history of the Brno opera will be covered through an online exhibition entitled Into the Czech Lands. Each of the recorded staging and concert will be accessible to viewers for three days.

The programme to be presented at the festival: