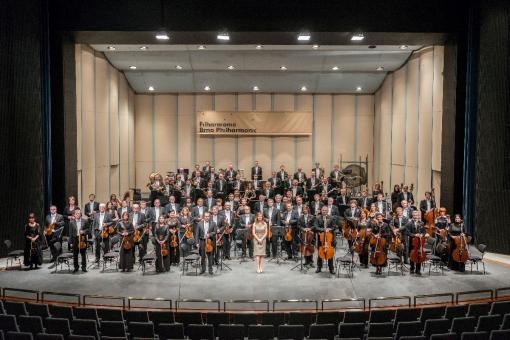 The New Year's Concert of the Brno Philharmonic is coming back to the Janáček Theatre after almost three years, and for the first time it will be led by the Chief Conductor Dennis Russell Davies. In 2020, the ensemble will richly celebrate the 250th anniversary of the birth of composer Ludwig van Beethoven, whose 9th symphony will be heard at the concert. The solo parts will be accompanied by soprano Kateřina Kněžíková, alto Jana Hrochová, tenor Richard Samek and bass Roman Janál, accompanied by the Brno Philharmonic and the Czech Philharmonic Choir Brno.

The gala evening will begin with Copland's Fanfare for the Common Man , the Slavonic Rhapsody by Viktor Ullmann and, and the second half will be dedicated to Beethoven's most famous work – Symphony No. 9 in D minor with the final Ode to Joy. “It is rather difficult to celebrate this anniversary, as Beethoven's work is a constant of our seasons. Therefore, we have prepared a number of unconventional projects, in which the author's compositions and works referring to him will be played. We prepared the New Year's concert to sound like a  universally valid humanist message of the symphony,” said the dramaturge of the Brno Philharmonic, Vítězslav Mikeš. The New Year's concert will take place on 1 January  2020 at 8 pm at the Janáček Theatre.

All three pieces, which will be part of the concert, combine the theme of humanism and the struggle for freedom. A. Copland's four-minute piece was inspired by the "Century of the Common Man" speech made on 8 May 1942 by US Vice President Henry A. Wallace. He spoke then about the historical march for freedom. The speech impressed British conductor Eugene Aynsley Goossens, who then asked A. Copland and many other authors to create a fanfare on the basis of it, which would eventually open his orchestra's concerts. A total of eighteen fanfares were created, and the one written by Copland for brasswinds and percussion has joined was made part of concert  repertoires and was given many makeovers for various instruments.

The second part of the evening is Slavonic Rhapsody for orchestra and obligato  saxophone. V. Ullmann composed it before 1940, inspired by the art of saxophonist Sigurd Rascher. In his Rhapsody he uses  a motif of Moravian folklore; the first theme is a citation from a Wallachian song Ej, musel by to chlap byť, čo by ma chcel nabit, and the second theme is constituted by a tune Keď na vojnu verbovali, sto tolarů slibovali. Ullmann, who died in Auschwitz in 1944, did not live to see the premiere of his symphony. It was introduced by the Beethoven Orchestra in Bonn under the baton of Dennis Russell Davies only as late as 1991. Jiří Klement will perform the saxophone part in Brno.

The second half of the evening is dedicated  to Beethoven's Symphony No. 9 in D minor. By incorporating the final Ode to Joy, Beethoven for the first time crossed the boundaries of a  classical symphony as a purely instrumental piece and added a choir to the final movement. The basic idea of ​​the original poem became a kind of anthem of brotherhood among nations. Since its inception, the Ninth has been perceived as a work calling for understanding, for the removal of borders and for the cooperation of all mankind. Between 1949 and 2003,  it closed the Prague Spring Festival each year. In 1972, the key melody  became the official anthem of the Council of Europe and since 1985 it has been the anthem of the European Union. “On Christmas 1989, one month after the fall of the Berlin Wall, Leonard Bernstein conducted Beethoven's Ninth Symphony with an international artistic line-up in both parts of the previously divided city of Berlin. That time an altered text was also sung, in which freedom was celebrated instead of joy. And it was once again Leonard Bernstein who conducted this work in an unforgettable way with the Czech Philharmonic at the closing concert of the first post-revolutionary season of the Prague Spring of 1990,” said music historian Vlasta Reittererová.