The Second Funky Night in ArtBar 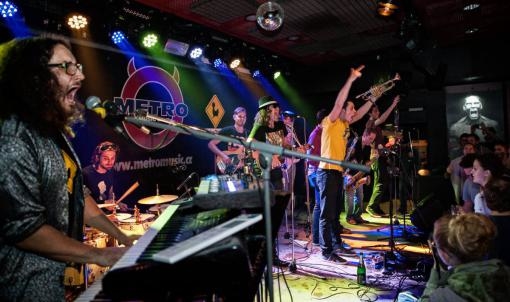 The ArtBar club in Brno hosts another Funky Night. Funky Chicken, Brass Avenue and Michael V of J.A.R, called Helicopter will appear. The event will feature well-known funky hits as well as completely new ones; the concerts will be accompanied by video projections and a light show.

The second Brno Funky Night will take place in ArtBar again. The event is organised  by the local band Funky Chicken, which has invited Brass Avenue to collaborate; this band brands itself as a "wind instrument showband". Michael V. of J.A.R, called Helicopter, will take care of the afterparty. "In the first half, listeners can look forward to live music performed by two great bands and the following after party, which will be the job of Michael V., who is seen in the Czech Republic as the best Dj in funky and dance music," adds Honza Shanny Fňukal of Funky Chicken.

The band Funky Chicken is currently preparing material for its second album, which it plans to partly present to the audience. In addition to new songs at the concert, audience will be treated to the band's hits such as Dance, Pumpovat [To Pump], Léto [Summer] and more. Funky Chicken is preparing, as well as the first Funky Night, a special line-up, where the wind instrument section will be added to the band's basic line-up.

Funky Chicken / Photo from archive of the band