The trio Dorůžka, Wyleżoł and Ballard is releasing an album on Bivak Records. They will christen it in Brno 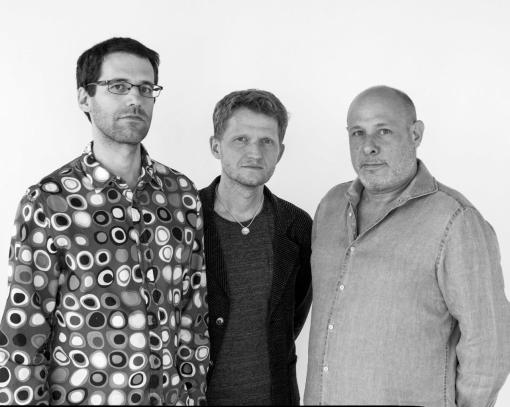 Guitarist David Dorůžka, Polish pianist Piotr Wyleżoł, and American drummer Jeff Ballard have known each other for years, but it wasn’t until last spring that they came together for the first time to record a new album. The band’s sound relies primarily on analogue electronic instruments, simple melodies, and complex grooves. The album launch, entitled Andromeda’s Mystery, will take place at the Husa na provázku Theater in Brno at the Syncopation Festival.

The musicians focus on combining old and new sounds and approaches into a unique synthesis that characterizes today’s world as they perceive it. “When I listened to what we recorded, the record sounded a little spacey to me. It seemed to me that it was not only about the Earth and the present, but also about the cosmos, about the stars, about distant mysterious things,” says David Dorůžka about Andromeda’s Mystery. The album is released by Bivak Records as a CD and in digital form. The band will release it on 26 June at 17:00 at the Husa na provázku Theater in Brno as part of a new JazzFestBrno event called Slavnosti synkop. A day later, the launch will also take place at the Jazz Dock in Prague.

As already mentioned, this trio of musicians shares a common past. Dorůžka performed with Ballard as early as 2008 and a few years later he was in Piotr Wyleżoł’s band, with whom he appeared at JazzBaltica festival and London’s South Bank Center. This particular line-up and repertoire, however, presents the musicians in a slightly more electric guise than the audience has known them in the past. The playing of both Dorůžka and Wyleżoł is characterized by its Slavic melodicism and lyricism, which this time are combined with Ballard’s lively rhythmic energy, which he so excelled in the formations of Chick Corea, Kurt Rosenwinkel, and Brad Mehldau, among others.

For the first time, the trio performed on the roof of Brno’s Vlněna high-rise building in front of the cameras of Czech Television as part of the JazzFestBrno on Screen series. Subsequently, the trio of musicians followed the unique concert with a studio recording. The album contains eight tracks, half of which were composed by David Dorůžka, three original pieces contributed by Piotr Wyleżoł and the playlist is completed by one older track from the pen of Jeff Ballard. The presence of an experienced drummer was also an inspiration for Dorůžka. “I thought that since we were playing with Jeff, I had to come up with at least some rhythmic challenge for us and for him. I’ve been studying certain rhythmic issues for some time now, and I thought it would be interesting to use them in Andromeda’s Mystery, so that the mystery was already in the rhythm. The composition is a bit tricky, but I’ll leave it to the listeners to find their way around it,” says the Czech guitarist looking back at the creation of the title track. The album is available for purchase on the label’s website, and you can also listen to it on streaming platforms.