This year's Brno Music Marathon made the city centre resound with music. Tens of thousands of people came around 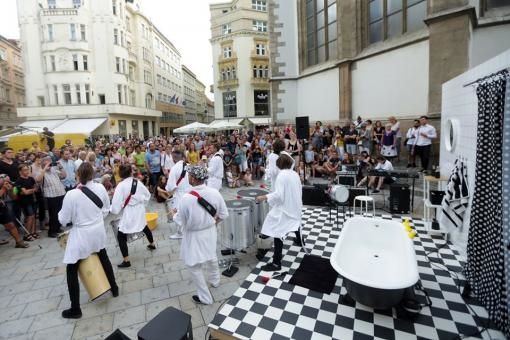 For four days, the centre of Brno turned into a vibrant metropolis full of music of many genres that were heard virtually everywhere. Brno reaffirmed during this extended weekend that it deserves to be a UNESCO City of Music. Most of the productions were free of charge, the paid ones were sold out and even the shows were added. The attendance estimated by the organizer is 35 thousand people. It was played in the squares, in the streets, on the balconies, but also in the underground, in the town hall, in the arcade or in the churches. This year's specials were concerts in four street rooms by the artist Kateřina Šedá.

The opening of the largest music festival in the centre of Brno was preceded by a fancy parade of performers from the Amanitas Fire Theatre in costumes made special by pyrotechnic effects. The parade brought dozens of people from the festival's Guest Centre through the city to Jakubské Square, where they handed over the relay to buskers. En.dru and Rhitmo factory performed in one of Kateřina Šedá's four street rooms, in a bathroom on Jakubské Square, and opened the festival. This started a merry-go-round of concerts and performances at twenty-two venues in the centre of Brno, which continued for the three days going forward. Crowds were everywhere; people enjoyed the music of many genres and endured even in the rain that sprinkled the festival on Saturday evening. For example, hundreds of people enjoyed under the rain a concert of the first lady of the Slovak pop Jana Kirschner, who performed on the Dominik Stage, the main stage of the festival. 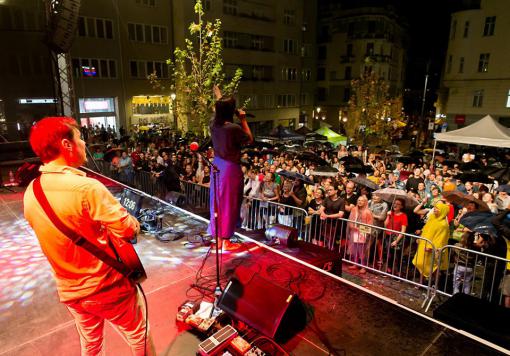 The Django Stage on Malinovského Square was once again dominated by Monika Bagárová on Friday and the Brunch'n'Park stage turned Moravské Square into a big dance scene. Žamboši launched their new CD on the Orlí Stage, while the Folklore Stage sounded with strong voices of the Male Choir from Hrubá Vrbka. Halls full of fans enjoyed the band Khoiba on the Kabinet Stage, Barbara Maria Willi & Friends in the Assembly Room of the New Town Hall and the duo Pavel Fischer & Jakub Jedlinský in the Mintmaster's Cellar. 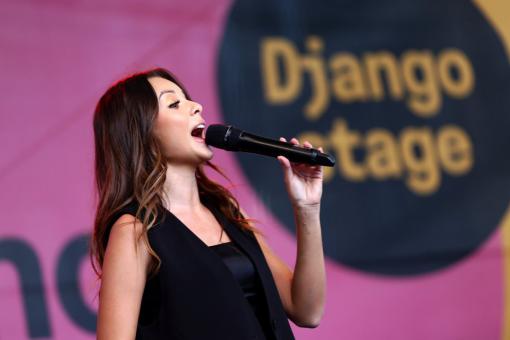 Sold-out Fléda welcomed DJ Jon Hopkins , sold-out Sono Centre hosted musical performances of Cirkus La Putyka, the Summer Terrace of Špilberk Castle featured Pokáč and the Spa in Rašínova Street even added one performance of Hausopera. This year's flagships of the festival were "home concerts" in the streets. Many players took turns in rooms designed by Kateřina Šedá, on Česká Street, Jakubské Square, behind the Letmo shopping mall and in the "Myší díra" [Mouse Hole]. The traditional Pianoštafeta [Piano Relay] in the Alfa mall was held under the auspices of the director of the Czech Philharmonic David Mareček, the Infinite Organ in the Jesuit Church had their patron in Professor Alena Veselá. 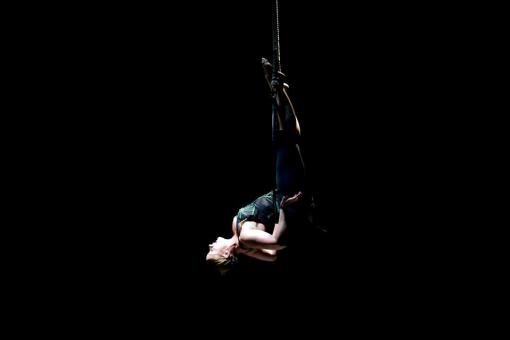 Náměstí Svobody Square hosted dance-acrobatic performances by the British Motionhouse and No Fit State Circus, as well as many barrel organ players, who came to Brno from all over Europe for their tenth international meeting, which they launched  at Náměstí Svobody Square and ended with a final concert in the Red Church.