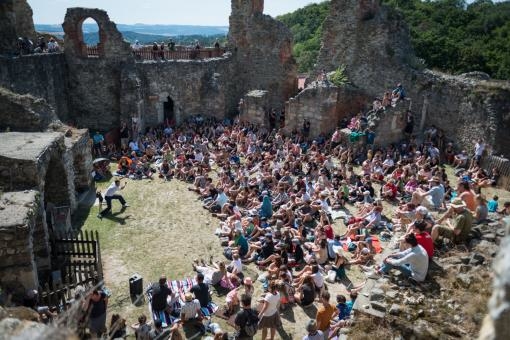 The festival for the Jewish quarter of Boskovice will take place in a more intimate version with a limited number of visitors this year. The organisers invite you to a three-day festival to take place this August. The programme promises representation of the Czech-German jazz scene, blues, theatre performances, site-specific projects, readings and lectures.

"For the first time in the long history of the festival, we could not present it to the full extent or at the usual time," says the chief programme editor Antonín Kocábek. "But in the end we decided not to give up and use all the available options. Although we had to postpone some of the most famous names to next year, we still think that the programme we offer is no poorer than in previous years and has a lot to offer. The offer of the film scene will once again be considered a separate film festival, and this time we have a very broad genre range and as is traditional a number of names that are still only to be talked about, and even with the shortened programme we have not forgotten about fans of literature, theatre or the fine arts."

Among the first confirmed bands is Květy  in several line-ups, then Mucha, Palma, Makak Akustikus, Evolet, Slut, První hoře, ZVA 12–28 Band, Past, Dingo, Phoenix Quartet, MarZ, I Love You Honey Bunny, Branko’s Bridge, On The Roof and Ciśnienie. Povodí Ohře and the recent Anděl Award winner Beata Hlavenková with her Kapela snů will also be featured.

The Jedl Theatre Association will present their performance Miláček / Píseň písní [Sweetheart / Song of Songs] written by Karol Wojtyła, the Kolonie Theatre will stage the performances for children Bacha na Bacha [Watch Out for Bach], Masobeton will give site specific performances, Martin Trdla, Jiří Šimáček and Magda Kolářová will read, Petr Blažek will lecture, and exhibitions will be given by the photographer Jindřich Štreit, the Slovak Hogwash  team and the photographer and the filmmaker Agnieszka Traczewska. Additional programme items will be published in as we go.

A full-feature session of the festival will take place on 8 to11 July 2021; tickets purchased so far will remain valid and their holders will be able to use them for this year's alternative variant on 28 to 30  August 2020, or keep them for next year.

Photo from archive of the festival