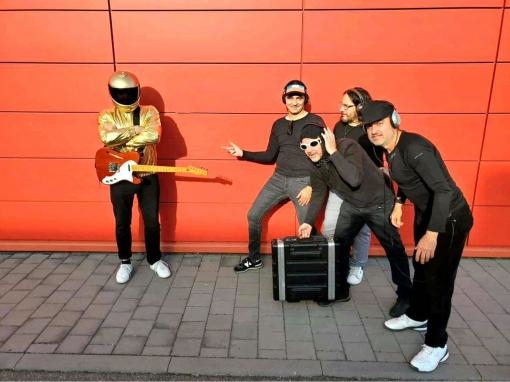 For the sixth year, the city festival UPROSTŘED is trying to revive the summer center of Brno. More than 40 diverse events fill the courtyards, squares, and streets with live music, theater, and other performances from June to September. Tonight, a concert by the band NaMars will open the event in the courtyard of the Old Town Hall.

“Summer in Brno will once again be about meeting and connecting people, genres, and moods. The festival’s dramaturgy is not about mass events, but about a relaxed atmosphere, about making the center really come alive, so that you can meet something interesting at every step and every day. Stop by, dance, meet friends. We are creating a city for people who live and have fun in it, and where visitors are also comfortable,” says Jana Janulíková, director of TIC BRNO, about the idea behind the UPROSTŘED festival.

“Swing, funk, rock, pop, songwriters, folk, and folklore – with UPROSTŘED you’ll get to know many local Brno bands of various genres, but also much more. You can expect theaters, site-specific performances, dance halls, summer screenings, architectural walks, afternoons for children, and even hydrotherapy. We are creating the program together with TIC BRNO so that everyone will find something for themselves,” adds Tomáš Pavčík, director of Kávéeska. Tonight, the festival will be opened by the band NaMars, the concert starts at 19:00 in the courtyard of the Old Town Hall.

In Brno, a city bearing the title of UNESCO Creative City of Music, you can choose from concerts of multiple genres from today until September. You can look forward to Hungarian and Romani tunes by Hazafele, the Swing Kong Orchestra will fill the courtyard of the Old Town Hall with music from the 1930s and 1940s, and the Brno band Golden Delicious is sure to please. A dance and music performance is promised by the Duel of Cooks or a Kitchen Revue in a Different Way, traditional Irish melodies will be played by the band Dálach, and you can sit with a folk song at the dulcimer with the BROLN Brno Radio Orchestra of Folk Instruments.