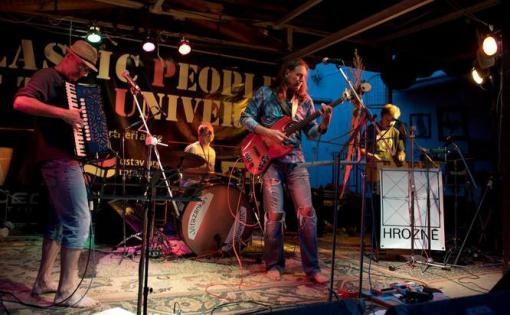 A concert called Valná hromada [General Meeting] will commemorate the legendary shows of music groups of the 1980s, when Brno's alternative scene was shaped. The joint concert will take place in ArtBar.

Valná hromada is a memory of the shows of alternative bands in Brno in 1982-83. The concert in ArtBar will feature the band Klikva-klikva led by Standa Filip from Ještě jsme se nedohodli [We Have Not Reached Agreement Yet] and Martin Růžička. Another band will be the trio MCH3, a formation of Mikoláš Chadima, the founder of the Czech alternative and a former member of the family of then emerging Brno's alternative scene. They will be alternated on the stage by the Brno band Hrozně, which has existed since 1982 and still belongs to the active stream of the Brno alternative. Sbor hudby [The Choir of Music], which appeared at several Valná hromada shows back in 1983, will present a show named Na stolku v herně [On the Table in a Playroom] with the old-new bass player Jirka "Bobeš" Prokš. Petr "Fili" Fiala will appear as a guest in a composition titled Nedefinitivně [Non-definitively], which will be performed in a new arrangement.

Hrozně / archive photo of the band