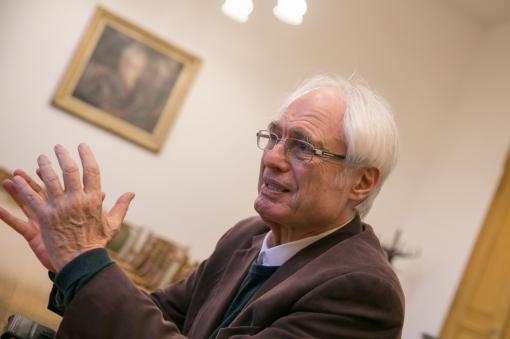 On the next day after the powerful experience I had gotten from the performance of Requiem by the Armenian composer Tigran Mansurian, I had the opportunity to meet its creator. The fragile, gentle and sincere music thus foreshadowed me of its author, with whom I spent a few precious moments in the director's lounge of the Besední dům in Brno in a very friendly conversation. more

Brussels Einstein at the Moravian Autumn in Brno

The jubilee 50th Moravian Autumn music festival started yesterday at Bobycentrum in Brno with a concert performance of the minimalist opera Einstein on the Beach by composer Philip Glass and director Robert Wilson. The concert version was created by collaboration of visual artist Germaine Kruip, Suzanne Vega and Ictus Ensemble and Collegium Vocale Gent. Although only the music remained from the previously stage show, the length of the concert itself was comparable with the opera work. Hence, the evening lasted almost four hours.  more

David Fligg: Gideon Klein would grow up to become a Bernstein-like personality

Doctor Fligg talked to us about one of the most talented composers and musicians of the first half of the twentieth century – Gideon Klein. He is at the same time one of the organizers of the project Gido‘s coming home, which commemorates a flat one hundred years from the composer’s birth.  more

A promise fulfilled: The Tales of Hoffmann

The National Theatre Brno started its new season yesterday by staging The Tales of Hoffmann, an opéra fantastique by French composer Jacques Offenbach with French libretto written by poet Jules Barbier. Directing was undertaken by the recognized artistic tandem SKUTR, consisting of Martin Kukučka and Lukáš Trpišovský. The title role was presented by Luciano Mastro, his faithful companion Nicklausse (and also the figure of the Muse at the end of the show) was performed by Markéta Cukrová. The roles of Hoffmann's sweethearts Olympia, Antonia, Giulietta and Stella have were performed by Martina Masaryková, Pavla Vykopalová, Daniela Straková-Šedrlová and Andrea Široká. The character of Hoffmann's eternal rival (Lindorf/Coppélius/Miracle/ Dappertutto) was interpreted by Ondrej Mráz. The orchestra was led by Ondrej Olos, the choir by Klára Složilová Roztočilová.  more

Brno Philharmonic has opened the season

The Brno Philharmonic launched its 64th season yesterday, which is also the second season of its current Chief Conductor and Artistic Director Dennis Russell Davies. Beside him, the leading Russian pianist Elisabeth Leonskaja also stood on the stage of the Brno Stadium. Brahms' Symphony No. 1 in C minor, Bartók's Piano Concerto No. 3 in E major and the Czech premiere of the composition DA.MA.SHI.E by the Japanese composer Joe Hisaishi's, connected with animated films of director Hayao Miyazaki, were chosen for the ceremonial start.  more

The Olomouc Baroque Festival Opens with a Modern Premiere

The Olomouc Baroque Festival has begun. In the local Jesuit Convent the seventh year of the festival opened with the modern premiere of the serenata Il tribunale di Giove by the Austrian composer Karl Ditters von Dittersdorf. The work was first performed at the birthday celebrations for the Prussian King Frederick the Great on 27 January 1775 and after a repeat in Wroclaw in 1777 it fell into oblivion. The Ensemble Damian decided to reverse this unfortunate fate, and led by the ensemble’s artistic director and director Tomáš Hanzlík they attempted to revive the work. Appearing in the solo roles were Leandro Lafont (Fate and Apollo), Kristýna Vylíčilová (the Genius of Europe and Minerva), Lucie Kaňková (Time and Fortune), Monika Jägerová (Jupiter) and Jakub Rousek (Mars). The costumes and backdrops were designed by the director Hanzlík.  more

The twenty-fourth season  of the Concentus Moraviae international music festival came to an end after almost a month of rich musical experiences. Musical works, thematically labelled as the Concert of Nations, guided the festival visitors around thirteen picturesque Moravian towns and gave them a taste of key musical works of (not only) European nations. All this was moreover served in the interpretation of more than twenty world-famous ensembles. With the conscious transnational, cross-border concept overreaching the Czech border, the festival organizers chose the Golden Hall of the renowned Musikverein Concert House as a suitable venue for the closing evening. The extraordinary finals of the 24th season opened thus a series of Concerts of Czech-Austrian Partnership and at the same time announced  the celebration of the festival's quarter of a century to be celebrated next year. In accordance with this symbolic overture of the concert, the main star of the festival was the patron of the festival and famous singer Magdalena Kožená, accompanied by the no less famous Collegium 1704 orchestra led by Václav Luks.  more

One of the biggest promises of the 24th Concentus Moraviae international festival was yesterday’s concert of the legendary Borodin Quartet, whose unique sound is the result not only of hard work but also collaboration with the composer Dmitri Shostakovich. This personal and interpretive trail still influences the group and is passed on to each new member. The programme took place in the library of the castle in Náměšť nad Oslavou , where in the 18th and 19th centuries it was the residence music-loving Haugwitz family. The music of Sergei Prokofiev, Joseph Haydn and Dmitri Shostakovich could be heard by the audience in a venue that was more than merely dignified.  more

Szymanowski Quartet in the rhythm of mazurka

The Polish ensemble Szymanowski Quartet at the Concentus Moraviae Festival presented works by their compatriots Karol Szymanowski, Stanisław Moniuszko and Gražyna Bacewicz in the Church of Sts. Peter and Paul in Řeznovice yesterday. The concert was part of worldwide celebrations of the two-hundredth anniversary of birth of Stanisław Moniuszko, which is considered by many to be the founder of Polish national music. The evening was held under the auspices of the Ambassador of the Republic of Poland to the Czech Republic, HE Barbara Ćwioro.  more

Visitors to concerts meet quite often with quartet compositions written by masters of European music. Haydn's string quartets are perennial stars in the repertoire of a number of ensembles and attention is also paid to works of contemporary European composers. Only exceptionally, however, can listeners take a peek into the musical cuisine of Asian or South American nations. Cuarteto Q-Arte decided to fill this blank space and dedicated itself to the works of Latin American authors. The programme, which they presented yesterday at the chateau in Slavkov u Brna (Austerlitz), consisted of works by Silvestre Revueltas, Alberto  Ginastera and Astor Piazzolla. All these three composers combine elements of domestic culture with European training and influences or impulses of different genres.  more