The most ambitious, the most unrepeatable, and the most challenging to produce. This is this year's “Mozart's Children” festival, whose Gala Concert will take place this Sunday at the Janáček Theater. Nearly two hundred performers will appear on stage, with young talents from all over South Moravia outnumbering professional musicians.  more

The Ibérica Festival of Ibero-American Cultures will take place this year in Brno, Prague, Čechy pod Kosířem, and Zdounky. The nineteenth edition of the festival will feature several Czech premieres. For the first time in the Czech Republic, the main star of the gala evening at Brno’s Špilberk, flamenco guitarist Álvaro Martinete, will perform with dancer Coral Fernández, as well as Colombian singer with Caribbean roots Concha Bernal and the Catalan duo Magalí Sare & Sebastià Gris. This year’s festival will also feature the premiere of a poetic recital from Karel Čapek’s texts, A Trip to Spain, performed by actor Tomáš Hanák, accompanied by Petr Vít’s guitar and Verónica Roa’s dance. There will be dance and music workshops for beginners, advanced, and children.  more

5 May 2022, 2:00
Classical Music Jazz Pop Traditional For kids Other
Author

The Czech Radio Endowment Fund and Czech Radio – Radiožurnál, in cooperation with the Endowment Fund of the Brno-born Magdalena Kožená, are launching a non-financial collection named after the favorite Czech musical “Kdyby tisíc klarinetů”, or “If a Thousand Clarinets”. The collection is intended for all child musicians for whom the purchase of a musical instrument is beyond the means of their family budget. The collection works on the principle of connecting donors and volunteers on the platform www.kdybytisicklarinetu.cz.  more

News: Agreement on the terms of construction for the Janáček Cultural Centre

The City of Brno has announced that an agreement has been reached with the owner of the International Hotel, HIB DEVELOPMENT, a. s. If the agreement is fulfilled, the construction of the Janáček Cultural Centre (JKC) will not be a compromise, but will fulfil the vision of having a top concert hall in Brno and gaining a new high-quality public space in the historic city centre. The interrelated key documents, i.e. the exchange agreement, the artwork purchase agreement, and the cooperation agreement, were recommended for approval by the Brno City Council today.  more

The mezzosoprano Magdalena Kožená together with Brno – city of music

UNESCO and the ZUŠ Open festival prepared the exceptional benefit concert. The song recital will take place on Monday, 13 December at 7 p.m. in Brno's Besední dům and will also be available as a live video broadcast. The purpose of the evening is to support and raise the profile of the unique Czech system of Primary Art Schools (ZUŠ).  more

Brno Cultural Newsletter presents a summary of events and changes relating to theatres, clubs, festivals and, overall, cultural events in Brno in the upcoming period. This time, it also focuses on Brno’s candidacy for the European Capital of Culture 2028.  more

October Newsletter of the Culture Department of the Brno City Municipality

Brno Cultural Newsletter presents a summary of events and changes relating to theatres, clubs, festivals and cultural events in Brno in the upcoming period. Last but not least, it also invites you to join the upcoming session of the Brno Cultural Parliament (Brněnský kulturní parlament).  more

Cross the river: Tomorrow’s festival on the bank of the River Svitava

For the fifth time, the festival will enliven the River Svitava’s waterfront. The programme, which is free of charge to visit, includes concerts, theatre performances, “neckyáda” (a show with boaters using unconventional and funny ways of boating or vessels) and much more. Performers will include Fast Food Orchestra, Phil Shoenfelt & Band of Heysek and more.  more

May Newsletter of the Culture Department of the Brno City Municipality

The culture newsletter details what’s on in Brno, the latest news and opportunities in culture.   more

As the designated UNESCO City of Music, Brno is all set to be filled with harmonious sounds of music once again. Hundreds of musicians will perform in the city over the four days of the festival, with dozens of concerts scheduled that shall make the squares, streets and concert halls resound with music. Encompassing a variety of genres, this year’s Brno Music Marathon will take place in mid-August, just like before, and it’s going to be one of the few public events to happen this year. The line-up includes Lenka Dusilová, Juwana Jenkins, Sisa Feher, Fanfara Transilvania, Malalata, Circus Brothers, Horňácká cimbálová muzika Petra Mičky (the Horňácko Cimbalom Band of Petr Mička), Javory and a host of others. Street “rooms” by Kateřina Šedá is not absent from it, either.  more

Pavel Borský: Primary schools of art are unique in our country, the interest of children is huge

You will read in the media about the impact of coronavirus on the level of teaching in compulsory schools. There is less talk of art schools. Yet a quarter of a million children attend primary art schools (PAS). What do these bring to us and to children? What makes them special? I put these and not only these questions to Pavel Borský, cellist of Indigo Quartet (a string ensemble), programmer of the musical scene of the Brno Music Marathon Festival, teacher at the Faculty of Theatre of JAMU and at V. Kaprálové PAS Brno as well as regional coordinator of the ZUŠ Open festival. As he himself pointed out, the exact impact of distance learning on art school students is yet to be seen, but the online environment has taught many children how to communicate better using modern technology. more 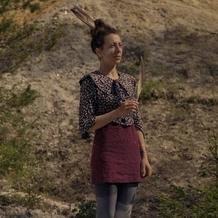 Yesterday evening at the piazzetta of the Janáček Theatre was marked by a concert to commence the 2019/2020 season of the National Theatre Brno (NdB). Promotion of the event ensured the most important thing for this music evening – hundreds of spectators who filled up the whole place. We should not forget the really wide age range, which is so much needed for future culture, especially at its lower limit (still in strollers).     more

Folk Holidays, a festival with soul

Folk & Country For kids Other
Author

Folkové prázdniny [Folk Holidays] in Náměšť nad Oslavou is a festival standing out with its dramaturgy, structure and atmosphere. Every season has its own theme, every evening has its own theme, and even some individual performances have their own themes. The long-time programme director Michal Schmidt managed this year to excellently balance Czech premiéres and truly extraordinary projects with reappearances and sure bets. This year's theme of Folkové prázdniny was About the Soul; however, this week-long event has its soul every year.  more 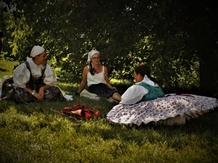 Last weekend, the 74th Strážnice International Folklore Festival 2019 as well as the 37th Strážnice Children's Folklore Festival were held in the South Moravian Mecca of folklore. The biggest folklore festival in the Czech Republic enjoys great interest and it wasn't  any different this year either, despite tropical temperatures, with tens of thousands of people coming back to Strážnice again.  more

Dance Traditional For kids Other
Author

In the summer months Špilberk Castle’s courtyard often resounds to the sound of music. Until September it is possible to combine a tour of the castle with a cultural experience. The organizers have tried to prepare a programme across genres that has something for everyone. Yesterday it was the turn of folk music. Despite the adverse weather the stage was dominated by the Military Art Ensemble Ondráš.  more

ZUŠ Open – Why Should We Not Rejoice?

On the last day of May, the Dominikánské Square in Brno came to life with music, singing and dancing. At half past two in the afternoon, the programme of the nationwide happening of primary artistic schools ZUŠ started under the patronage of the Magdalena Kožená Endowment Fund by announcing the results of the "TO JE talent"competition. The participants did not only come to pick up with prizes. Several of the award-winning singers and musicians proved this. For example, Lucie Sedláčková with the song by Ewa Farná Měls mě vůbec rád [Did You Love Me At All?] attracted an ever growing crowd of listeners, while singer and pianist Veronika Vávrová did the same with the ballad Million Reasons by Lady Gaga.  more