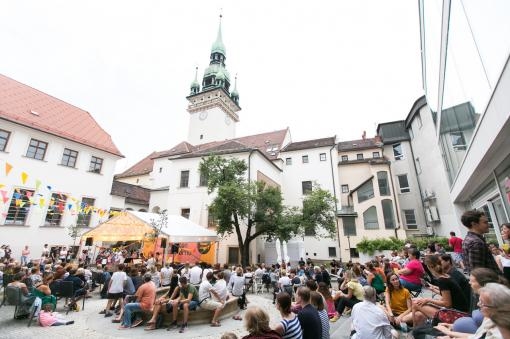 As the designated UNESCO City of Music, Brno is all set to be filled with harmonious sounds of music once again. Hundreds of musicians will perform in the city over the four days of the festival, with dozens of concerts scheduled that shall make the squares, streets and concert halls resound with music. Encompassing a variety of genres, this year’s Brno Music Marathon will take place in mid-August, just like before, and it’s going to be one of the few public events to happen this year. The line-up includes Lenka Dusilová, Juwana Jenkins, Sisa Feher, Fanfara Transilvania, Malalata, Circus Brothers, Horňácká cimbálová muzika Petra Mičky (the Horňácko Cimbalom Band of Petr Mička), Javory and a host of others. Street “rooms” by Kateřina Šedá is not absent from it, either.

A “full” version of the programme is envisaged, which should not be significantly affected by coronavirus related restrictions. The event will present a diverse range of different musical genres and styles performed to a high standard. Among this year’s artists is singer Lenka Dusilová, who received four Angel Award (Cena Anděl) nominations this year, and she will perform with the band Květy for the first time in Brno. The American blues singer Juwana Jenkins, musician Sisa Feher and singer Amelie Siba are also appearing. The vibrant rhythms of the Balkans will be on show courtesy of Fanfara Transilvania, Malalata and Circus Brothers. A set by Dasha in conjunction with Epoque Quartet is also being premiered in Brno. In terms of folk music, performers include Hrubá hudba, Horňácká cimbálová muzika Petra Mičky (the Horňácko Cimbalom Band of Petr Mička), Javory and Tomáš Koláček. “The Stage of Songs” will introduce Vladimír Merta, Tomáš Matonoha, and fabulous singer and fan of loops Tereza Balonová. “From the very beginning, the festival has focused on the best-quality music and new projects. This trend shall continue, alongside efforts to raise the artistic level of the Marathon yet further. We seek out top artists and new talent not only nationally, but also from abroad,” explains festival manager Eliška Kratěnová.

The Music Marathon shall showcase a variety of genres on 12 to 15 August 2021.

This year’s schedule has a new stage: World Music. In cooperation with World Music Charts Europe, three leading, successful ensembles are appearing on it: vocal quintet Kata from the Faeroe Islands, the Flemish folk group Spilar play the music of their homeland and Bosnian singer Damir Imamović and his band. The quality of the selection is guaranteed not only through their success in the music charts, but also by the artistic director of the stage himself – radio presenter Milan Tesař of Rádio Proglas. “We endeavour to get people from Brno involved that have great musical insight and original ideas in the development of the festival’s schedule. This year, the team behind preparation of the programme includes Milan Tesař, Jiří Švéda, Barbara Maria Willi, Marie Hvozdecká, Martin Kyšperský, Oldřich Vojáček, Aleš Petržela, Přemysl Štěpánek, Zdeněk Král and other big names,” says festival founder David Dittrich.

The festival’s unique atmosphere is added to by street musicians performing in unique small “rooms” dotted around the city centre. This project combines music and visual arts and is entitled Bezuliční busking (No-street Busking), prepared by the artist Kateřina Šedá. This year, visitors to the festival can look forward to concerts in a variety of “rooms” modelled after places such as a private health practice, a living room, a bedroom, a children’s room, a bathroom and even a garage. Throughout the festival, performances in unusual places are occurring, such as a water tower, an underground area, a roof or inside a car.

The Marathon has cooperated with TIC BRNO (Tourist Information Centre) in the long term and its festival entitled Na prknech, dlažbě i trávě (On Boards, Pavement and Grass) that takes place alongside the Marathon. This outdoor theatre festival puts on a programme for children in particular, but adults will have something to look forward to, as well. Together, both festivals are planning a circus-style opening featuring the ensemble Cirk La Putyka.

Although the future of cultural events in the Czech Republic remains uncertain, the unique concept of the festival allows for it to go ahead even under heightened restrictions, as can be demonstrated through the last year’s festival (the 5th in the row), which happened almost to its full extent in a manner respecting safety. “While others have been forced to cancel or move their festivals, thanks to the way the Marathon festival is organised, we have been able to bring the project to a successful end. This year too, the safety of our visitors is our priority, while maintaining the schedule to the maximum possible scope, meaning most performances are planned to take place at outdoor venues around Brno. We intend to make the most of the city centre,” says manager Kratěnová. Examples of new sites to be tested in this manner include the small square in front of the Janáček Theatre, which shall host a programme called Balkan Night.

The Brno Music Marathon is a key music event in Brno as part of its membership in the UNESCO Creative Cities Network in the field of music. One of the reasons the City is registered in this prestigious network is the exceptionally varied and high-quality music on show, which the festival presents in a very focused way. In this context, the Festival will also explore environmental activities and cooperation with Brno’s creative industries.

Visitors can go to numerous performances for free, and when tickets are required, they can be purchased from the GoOut network.