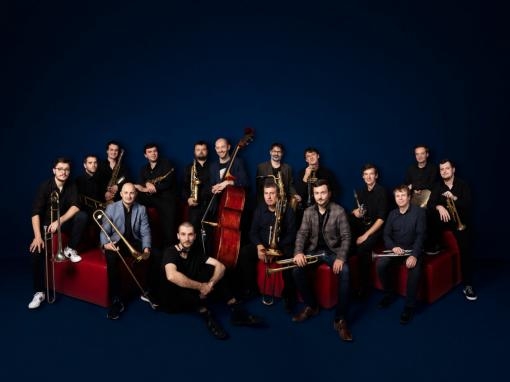 The Cotatcha Orchestra, a big band from Brno, is preparing another concert in a series presenting the work and anniversaries of famous jazzmen. The Croatian singer Daniel Caccia will perform with them as a guest this time. Traditional as well as new arrangements will feature works by trumpeter and singer Louis Armstrong, who was born 120 years ago, singer Jon Hendricks, who would have turned 100 this year, and pianist Stan Kenton, ten years older than Hendricks.

Cotatcha Orchestra, nominated for the Anděl (Angel) Award for its Bigbandová elektronika album, is preparing another concert to commemorate Louis Armstrong - one of the most important figures not only in jazz music, but on the entire world music scene. Stan Kenton is an important figure in big band jazz. The Grammy Award-winning pianist and composer is known for his distinctive signature with classical influences and his work with an expanded brass section. Jon Hendricks made famous a discipline called vocalise, where originally instrumental solos are written lyrics and sung. In addition, he could faithfully imitate the sounds of instruments such as tenor saxophone, trombone or double bass. It is exactly Hendricks who is followed by the guest of the exceptional programme, Croatian Daniel Caccia. During his activity with the German National Youth Jazz Orchestra BundesJazzOrchester as a solo singer, Caccia was voted Best Young Vocalist of 2013 by the prestigious American magazine DownBeat. After winning the Croatian Porin Music Award for Jazz Album of the Year with HGM Jazz Orchestra Zagreb in 2014, he launched his solo debut album Lifeline and was nominated for the German Echo Jazz Music Award as Singer of the Year 2016. The joint concert of the Cotatcha Orchestra and Daniel Caccia takes place on 31 October at 7.30 p.m. at Cabaret Des Péchés.

The sixteen-member Cotatcha Orchestra has been on the scene under the direction of Jiří Kotača for six years. It brings together two generations of Czech jazz musicians; most of its members are associated with the Jazz Interpretation Department at JAMU (Janaček Academy of Music and Performing Arts) in Brno. The big band’s path led from covers of domestic and foreign authors through cooperation with a number of artists to its own original repertoire. Last year, the big band released their debut album Bigbandová elektronika / Bigband Electronics at the American label Parma Recordings.