In an Old Photo: Today's premiere of the ÚstaF-voiceband.cz ensemble 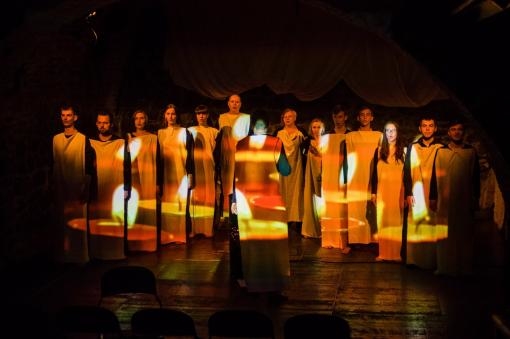 Brno's ÚstaF-voiceband.cz is the only ensemble of its kind in the Czech Republic. It devotes itself to the interpretation of poetry on theatre stages. Today, Friday 8 November, it will present the premiere of its performance In an Old Photo, which will also be one of the first theatrical pieces in the newly created Brno field of performing arts called Terrain. The premiere deals with the work of Pernambuco by Ivan Wernisch.

The voice band formation ÚstaF-voiceband.cz in its performance Na staré fotce[In an Old Photo] is based on the Pernambuco collection . The upcoming premiere enters the stormy waters and mysterious depths of the ocean of poetry by Ivan Wernisch, where tragic becomes grotesque and the tentacles of the absurdity krakens tickle both bellies and brain ampersands. The premiere is announced to take place today, 8 November  2019 at 7:30 pm in the Centre of Experimental Theatre at Zelný trh.

The ÚstaF-voiceband.cz theatre association was founded in 1997 in Brno-Komín at the Pastviny High School under the leadership of Zdeněk R. Šturma. Subsequently, he and the ensemble moved to Křenová High School, which has ever since provided its patronage to the band. During the time of existence of the ensemble, several concerts and stage shows have been produced  (The Best of Voiceband, productions such as Brno, You're Cursed, Owner, Ky-ky-ti-ce-ce, etc.). The association cooperates with Brno's Hadivadlo  theatre (performances such as  Czech Currency, Velemarš), performs at Wolker's Prostějov, Jirásek's Hronov and Šrámek's Písek festivals, etc. During the Moravian Autumn 2019 festival it collaborated on the world premiere of Gide's play Oedipus with Bohuslav Martinů's incidental music. Now it has become a guest theatre component of Terrain, which has been the third stage of the Centre of Experimental Theatre in Brno since this year.

The poet Ivan Wernisch was born in 1942 in Prague. He wrote several dozen poetry collections, the first of which, Kam letí nebe [Where the Sky Flies], was published in 1961. He was also the editor of six poetry anthologies and translator of German, Flemish and Russian poetry. He was awarded the State Prize for Literature in 2012 for his lifelong work, in 2018 he was awarded the Franz Kafka International Prize and in 2019 he also won the Magnesia Litera award for the Pernambuco collection . His poetry is used in literary stylizations and mystifications that blur the line between reality and imagination.

ÚstaF-voiceband.cz / archive photo of the ensemble