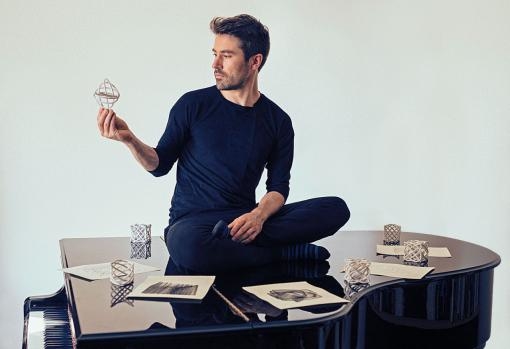 The opening of the seventh season of the Jazz & World Music cycle, which consists of six evenings this year, is approaching. It will introduce musicians from Europe and overseas. At the beginning of the subscription series, Dan Tepfer will perform his Natural Machines programme and will play on a Yamaha disklavier. Other concerts will feature Efe Turumtay & Nikola Zarić, Lucienne Renaudin Vary & Robert Balzar Trio and Airelle Besson & Lionel Suarez.

Tepfer will bring a disklavier to Brno – an acoustic instrument with built-in electronics. It sends Tepfer's music into a computer, which processes the data and responds by making the keyboard sound by itself. “At the same time, the tones are transformed into a graphic form in real time, giving the audience both musical and visual experience. I believe it will be a real adventure for many of them,” said Marie Kučerová, Director of the Brno Philharmonic.

Thirty-seven-year-old New Yorker Dan Tepfer has a degree in astrophysics, which is also reflected in his music – he connects the two worlds organically. He integrates computer-controlled algorithms into his improvisational approach. “In Natural Machines, it works by programming simple rules for the computer to respond – and I respond to what I hear. The visualizations that accompany it reveal the basic musical structure of each piece, being generated in real time while playing,” Tepfer described the project, which he will present in Brno this Wednesday.

A month later, two cosmopolitans with Turkish roots will come to Brno: violinist Efe Turumtay and accordionist Nikola Zarić. Their VIA project is an amusing musical conversation between musicians with ethnic roots and virtuosity of classically trained players. "Listeners are in for a mix of complicated rhythms and sounds of the Orient and the Balkans transferred to the world of tango, jazz or classical music," said Vilém Spilka, dramaturgist of the Jazz & World Music series.

The third concert in January will offer five top musicians. In the first half of the evening, David Dorůžka, Jaromír Honzák and Jiří Slavík. In the second, Liam Noble and Paul Clarvis. While the domestic trio will focus on half-forgotten Czech tunes, the duo from overseas will present their own version of West Side Story. Claris builds on his experience and collaboration with Leonard Bernstein; in fact, he played drums under the baton of the author in 1983 and also toured Europe and Japan with him.

February and March belong to two French trumpeters. At first it will be Lucienne Renaudin Vary, a rising star on the international scene who will play with Robert Balzar Trio and then Airelle Besson accompanied by accordionist Lionel Suarez. In April, the jazz cycle will conclude with the Conéxion programme, which is full of flamenco. Juan Gómez, one of the most influential flamenco composers and guitarists, will perform along with pianist Marco Mezquida, accompanied by percussionist Paco de Mode.