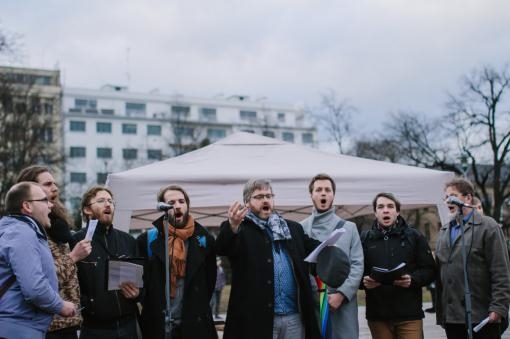 Leoš Janáček's teacher Pavel Křížkovský would celebrate his 200th birthday this year. The male choir Láska opravdivá [Truthful Love] will commemorate his anniversary by a concert at the composer's statue at the foot of the Špilberk hill. We will hear male choral pieces by P. Křížkovský and L. Janáček.

Pavel Křížkovský was born on 9 January 1820 in Holasovice. He was a member of the Augustinian Order. As a versatile musician he founded and led the (then)  male choir Beseda brněnská. Leoš Janáček, who was a founder of the Augustinian Monastery in Old Brno, knew him as a choirmaster and teacher during already during his childhood years. Křížkovský's pioneering works for male choir influenced Janáček's later epochal works for these casts. Pavel Křížkovský died on 8 May 1885 in Brno.

The outdoor concert of the choir will take place at the statue of Křížkovský in Brno (at the entrance from Údolní Street between the gym Pod Hradem and Cafe Podnebi) on Thursday 9 January 2020 from 17:00.