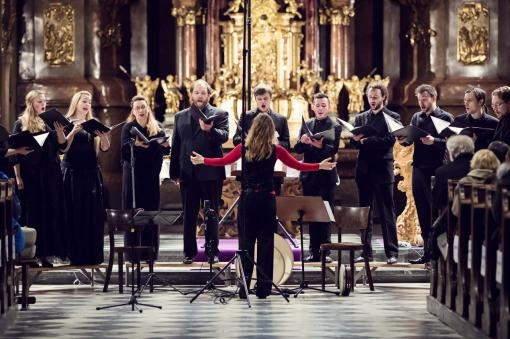 The mystical cantata Musikalische Exequien by Heinrich Schütz, the greatest composer of the era before Bach, will be performed by the Czech Ensemble Baroque. This work will be confronted with another two-chorus motet at the concert, but this time written by an almost unknown author, Johannes Schimrack (or Ján Šimrák in Slovak). The concert will take place in the Church of St. Michael.

Heinrich Schütz composed this famous work for an important occasion, the funeral of his sovereign Heinrich Posthumus Reuß. Of the three parts to be included in the three different parts of the Requiem, the first is based on numerous passages from the Bible, followed by a two-chorus motet related to the text of the sermon and confession of Simeon's faith "Lord, Now You Can Release Your Servant in Peace", to which a remote choir answers "Blessed Be the Dead"– as if from heaven.

Ján Šimrák was a Slovak composer of the first half of the 17th century. Already during his time in Spišské Podhradie he was a respected composer and praised by contemporary sources as an excellent organist. At the end of the 17th century, after violent recatholicisation, his work fell into oblivion and was revived only by modern musicological research. The 54 compositions that have been preserved to date include mainly larger polyphonic works for 8, 12- to 20-voice vocal or vocal-instrumental ensembles. Such is also the motet Jauchzet dem Herren.