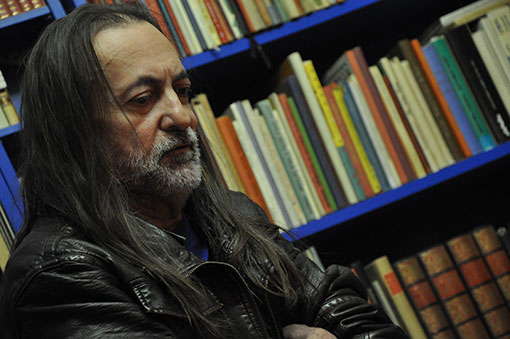 The poet, musician, publisher and organizer of underground festivals Jaroslav Erik Frič has died this morning.

Jaroslav Erik Frič  was born on 14 August 1949 in Horní Libina near Šumperk. He attended elementary school and grammar school in Ostrava. Between the years 1967 and 1968 he studied an intensive course at the Language School in Ostrava (English, Russian, French and Italian) and went abroad immediately after passing the state exams. In the second half of the year 1968 he lived in Western Europe, especially in England and Scotland, where he often made his living as a street musician. He returned to the occupied homeland in the autumn of the same year and began to study English and philosophy in Olomouc and later in Brno. In 1973, Frič, Jiří Frišauf and Jiří Kuběna launched an apartment scene called Šlépěj v okně [A Footstep in the Window] on Veveří Street No. 54 in Brno. In Brno, he also devoted himself to publishing samizdat (publications not officially approved by the regime) for his friends; these often consisted of texts by Josef Šafařík and Jiří Kuběna.

After the year 1989 he founded a publishing house in Vranov nad Dyjí and later also in Brno; it was called Vetus Via. In the years 1998 and 1999 he published four issues of his own magazine entitled Potulný dělník  [The Wandering Worker], and from 2000 on he organized a poetry festival with friends in Brno. In addition, Frič focused on civic associations and charity organizations whose aim was to help minorities or handicapped people. As an organizer he stood at the onset of events such as the Napříč-Konec Léta [Across-the End of Summer] multicultural festival, the Potulný dělník poetry festival, children's days called Proti noci - v nás [Against the Night - Inside Ourselves], a project called Potulná akademie  [The Wandering Academy] - "schools – non-schools", the Uši a Vítr [Ears and the Wind] festival, and regular musical evenings of the Wandering Academy in various places of Brno. He returned to playing in the streets of Brno in 2006. Later, Frič started to write a blog for which he was also nominated for the Magnesia Litera Award in the years 2017 and 2018.