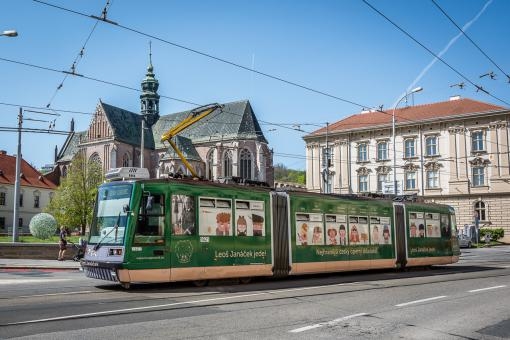 The 165th anniversary of the birth of Leoš Janáček falls on today, Wednesday 3 July 2019. Janáček is one of our opera composers most frequently played abroad. TIC Brno dedicated a tram to him for his birthday this year, with the main characters from his operas graphically rendered by Brno artist Vendulka Chalánková. Janáček also has his own website, an educational trail, a memorial and an opera festival.

In city streets, you can already meet the tram with the main characters from his operas graphically rendered by Brno artist Vendulka Chalánková. With the slogan “Leoš Janáček is riding”, the tram promotes not only the composer himself, but also his operas. Janáček also has an educational trail in Brno, a memorial (museum) and his own website where you can play a music Match Up (a memory game).

Leoš Janáček was born on 3 July 1854 in Hukvaldy near Příbor in the family of teacher Jiří Janáček. His work represents one of the most significant achievements of the 20th century music. Janáček's life and work are closely related to Brno, where he lived and worked from his young age. In addition to composing, he also devoted himself to organisational activities in the field of music, which contributed to a fundamental development of Brno's cultural life. And the fact that Brno is still a city of music and of Leoš Janáček was also confirmed by UNESCO. Nowadays, according to statistics from the Operabase portal, Janáček ranks among the twenty most frequently played opera composers in the world.

The website about the life of Leoš Janáček contains interesting facts about the composer's life, a complete list of his works, or a musical Match Up memory game. You will also find animated videos here that illustrate the most important moments in the life of the Master in three minutes. You will also find inspiration for your visit to the city or an offer of original gifts with Janáček motifs from local artists and designers. Not long ago, even the famous Czech writer Milan Kundera, who has a warm relationship with Janáček and is one of his prominent promoters, was pleased by them in Paris.

Every two years, the Janáček Brno international festival is held in Brno; it is currently the winner of the prestigious International Opera Awards in the category of opera festivals. It is a showcase of top domestic and foreign productions of Janáček's operas with numerous dramaturgically pioneering  concerts. A number of foreign ensembles and visitors come to Brno for the festival to enjoy Janáček; apart from the top programme they also appreciate the possibility of listening to his music in the authentic ambiance of the city in which it was written and in most cases also globally premiered.

Photo from archive of TIC BRNO